In keeping with the theme of celebrating Star Trek‘s 50th anniversary recently, I’ll be looking at the most obscure show within that universe: Star Trek: The Animated Series. You might say it’s not that obscure, to which I would point at the “subjective” part of the title. With its odd art style, kid-friendly nature, and dubious canonicity, it’s undoubtedly the least watched and least appreciated of the various Star Trek shows. But does it deserve a second look, and is it worth watching for an adult viewer today? Or should it be tossed in the discontinuity bin alongside such “gems” as Stargate Infinity? Let’s find out as I watch it for the first time. 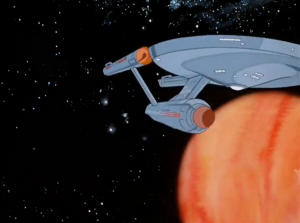 The Enterprise, in all its animated glory.

The premise of Star Trek: The Animated Series is obvious–to depict the remainder of the TOS Enterprise‘s 5 year mission. However, the transition to an animated, half-hour format presented many new problems and opportunities. For one, it was much easier to depict non-humanoid aliens and incredible events (things that, today, are done with CGI in live action productions). On the other hand, we now have half as much time to develop the story, and a much smaller budget with which to animate these stories, to the point where they couldn’t afford to bring Walter Koenig back as Chekov.

Given what it is, much of the character and setting are already in place and well-developed from TOS, so there’s no real need to delve into all that the way I usually would in a Primer. Let’s skip straight to the good part, eh? 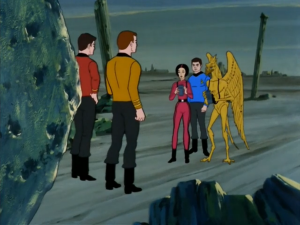 Imagine those giant wings on a live actor.

All in all, Star Trek: The Animated Series is the black sheep of the Star Trek family, but it’s a member of the family nonetheless. For completionist fans, it’s worth a watch, and anyone eager for just a little bit more after finishing TOS would likely get some enjoyment out of it. I must admit, there’s something magical about hearing the original cast in “new” stories, even when the stories themselves were a bit of a letdown. It might be better to look at this lightly, the way one might read a Marvel:What If? or DC’s Elseworlds comic. What if Kirk met Lucifer, who turned out to be a magical alien? What if Spock accidentally time-traveled himself out of existence? Then we can enjoy these episodes as unique thought experiments, without worrying ourselves with the continuity effects of having personal force-fields that are never seen again. On the other hand, if you don’t like TOS and somehow made it this far into the article, then there’s absolutely nothing of value for you here. If you’re in the middle, consider trying a few of the “sequel” episodes, like “More Tribbles, More Troubles,” “Yesteryear,” or “Mudd’s Passion.” These have the most appeal to a Trek fan curious about TAS.

3/5 UFOs. Appeals to dedicated Trekkies, and little else.

A quick reminder of my rating system: a 5 represents must-see–a “hidden gem,” as it were. A 4 is good, solid television. A 3 is “cult classic” stage, where the show’s appeal is likely limited to a specific group. A 2 is flawed, but fun, or even “so bad it’s good,” depending on the series and its release timeframe. A 1, of course, is avoid at all costs. Star Trek: The Animated Series is available on Netflix, Amazon Prime, and CBS All Access. You can also pick it up on DVD, and recently it was remastered for BluRay in the 50th anniversary collection, but isn’t available outside that set (yet?).