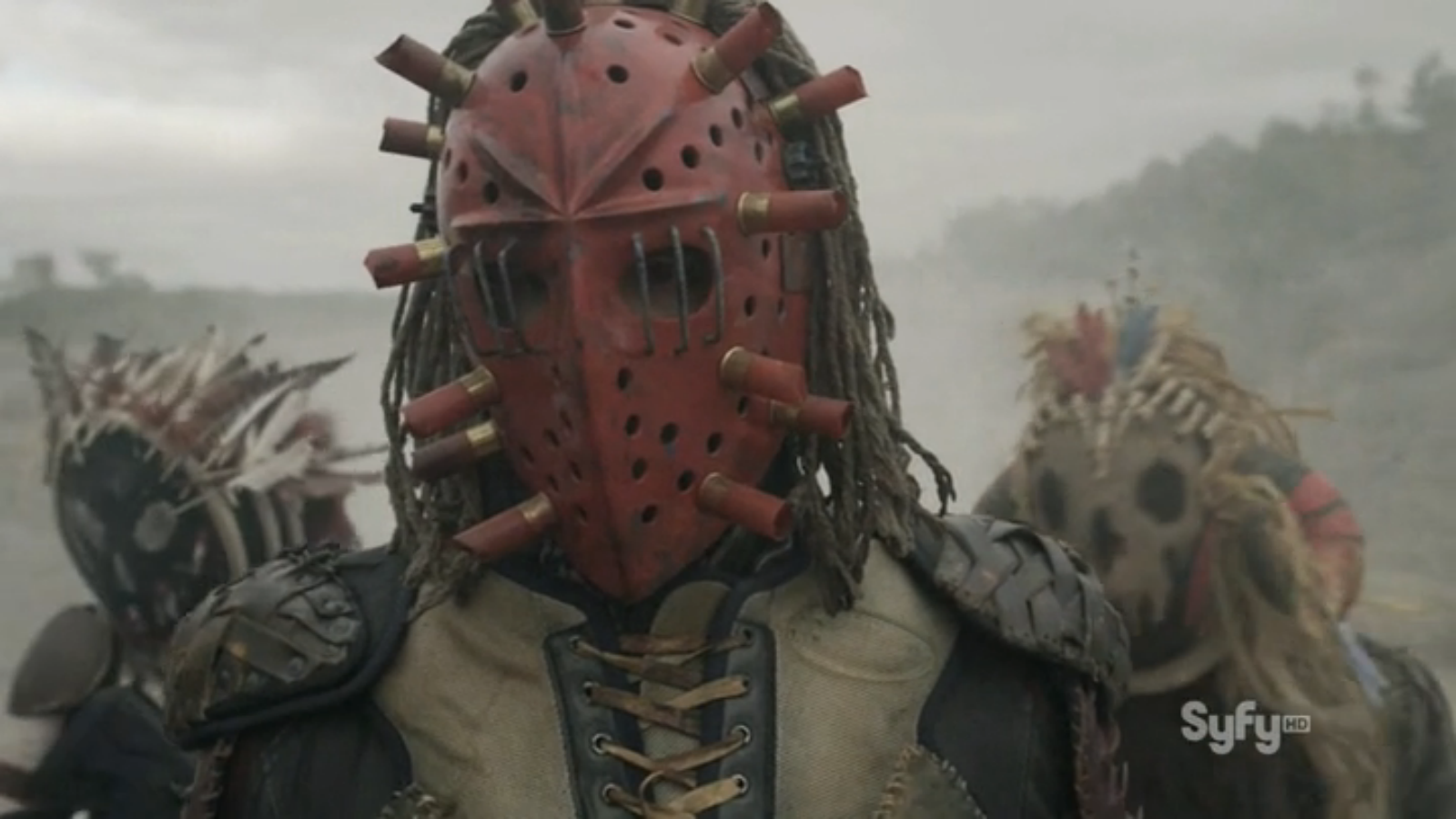 After the wham episode that was last week, Defiance takes an odd turn, but keeps the intensity going. Alliances and relationships are shifting in a way that could either be excellent or disastrous, and with this show both options are equally likely. Read on for more.

The previews for this episode were a little misleading, giving the impression that the driving plot would be rescuing Berlin after she’s taken by Raiders. That’s not quite how things turn out, however, and it’s probably for the best. The last thing we need with all the plotlines going on is a generic villain of the week. Berlin and Pottinger, out picking up new mining equipment, are indeed beset by Raiders wearing some ridiculous outfits, although given who’s behind the mask it makes sense. All the soldiers are killed, the equipment is stolen, and Berlin’s camera is destroyed (that’s gonna be tough to replace), but she’s otherwise unharmed. Two of the raiders are likewise killed, and it appears that their red-masked leader–whose name, according to the game, is literally “Shotgun Murderface”–is going to kill Pottinger, execution style. Instead, he just whips it out and pees on him and leaves. Very mature. While, again, it makes sense given who’s behind the mask, it’s exactly this sort of thing that makes it hard to recommend Defiance to people. Nobody wants scenes like that in their sci-fi! 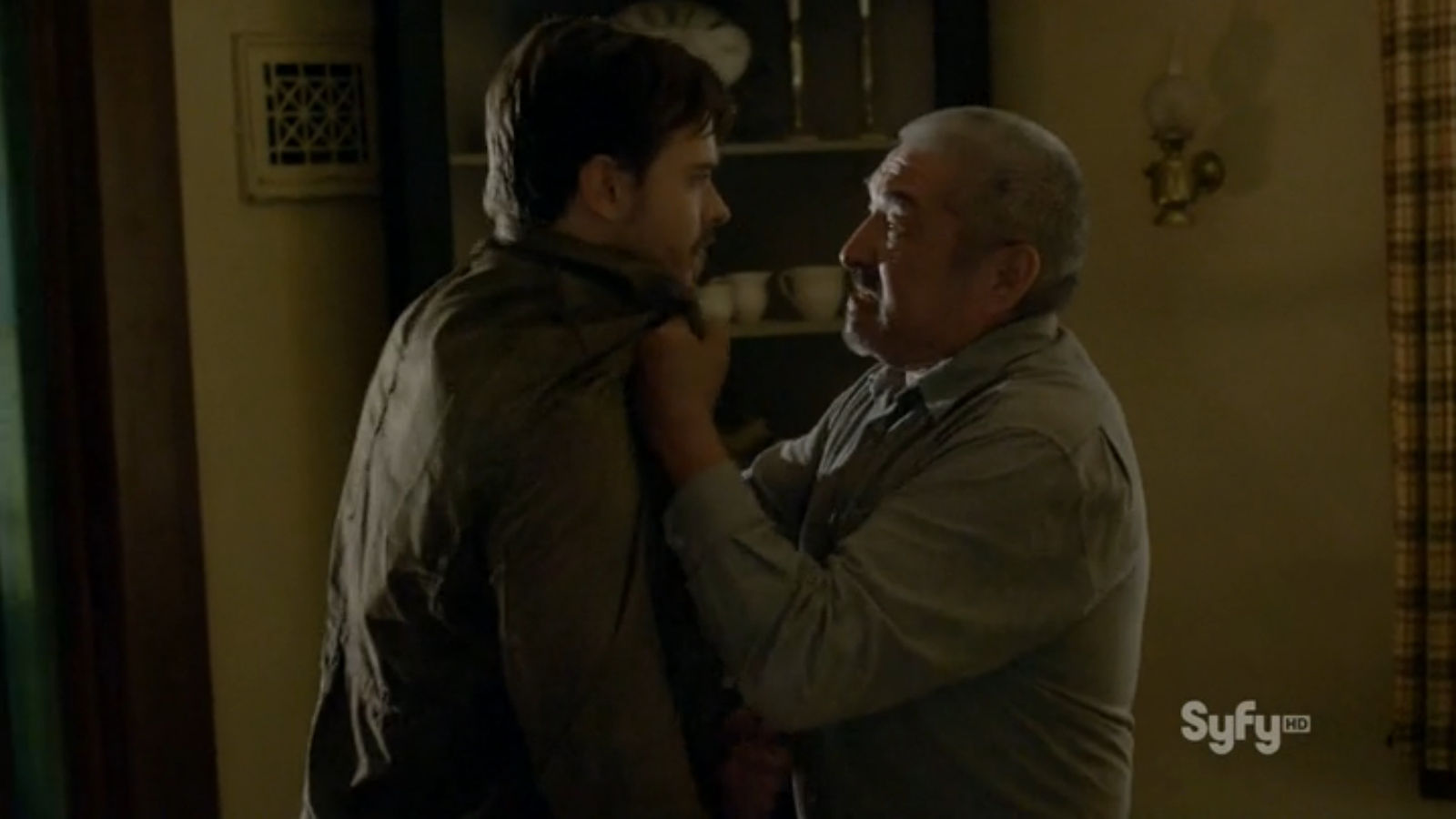 I think instead of black lung, these miners might be getting brain damage.

After the credits, Datak tries (in his own strange way) to sort-of maybe apologize for overreacting last week. Stahma’s hardly buying it, but he hasn’t outlived his usefulness yet, so she suggests they instead become partners. He fakes her out and leaves. Bad move, Datak; she’s not going to let that one go. Meanwhile, Irisa walks in on Amanda and Nolan getting it on, to which she manages a zing about his parenting abilities. Two weeks in a row! Pottinger seems quite disturbed by what happened, to the extent that his Bioman, Churchill, wants revenge. Pottinger just wants the equipment back, but Nolan isn’t optimistic about their chances of recovering it. Wandering the deserts in search of a couple guys with a massive headstart is indeed a waste of time, but Nolan definitely seems like he’s trying to sweep it under the rug.

Berlin deals with it by trying to get some footage off the camera, while Tommy pesters her about going to see the doctor. He uses her real name, Jessica, which she hates. She turns it around on him and brings up Irisa. He swears he wants nothing to do with Irisa, although there’s the distinct feeling that neither of them believe it lingering in the air. 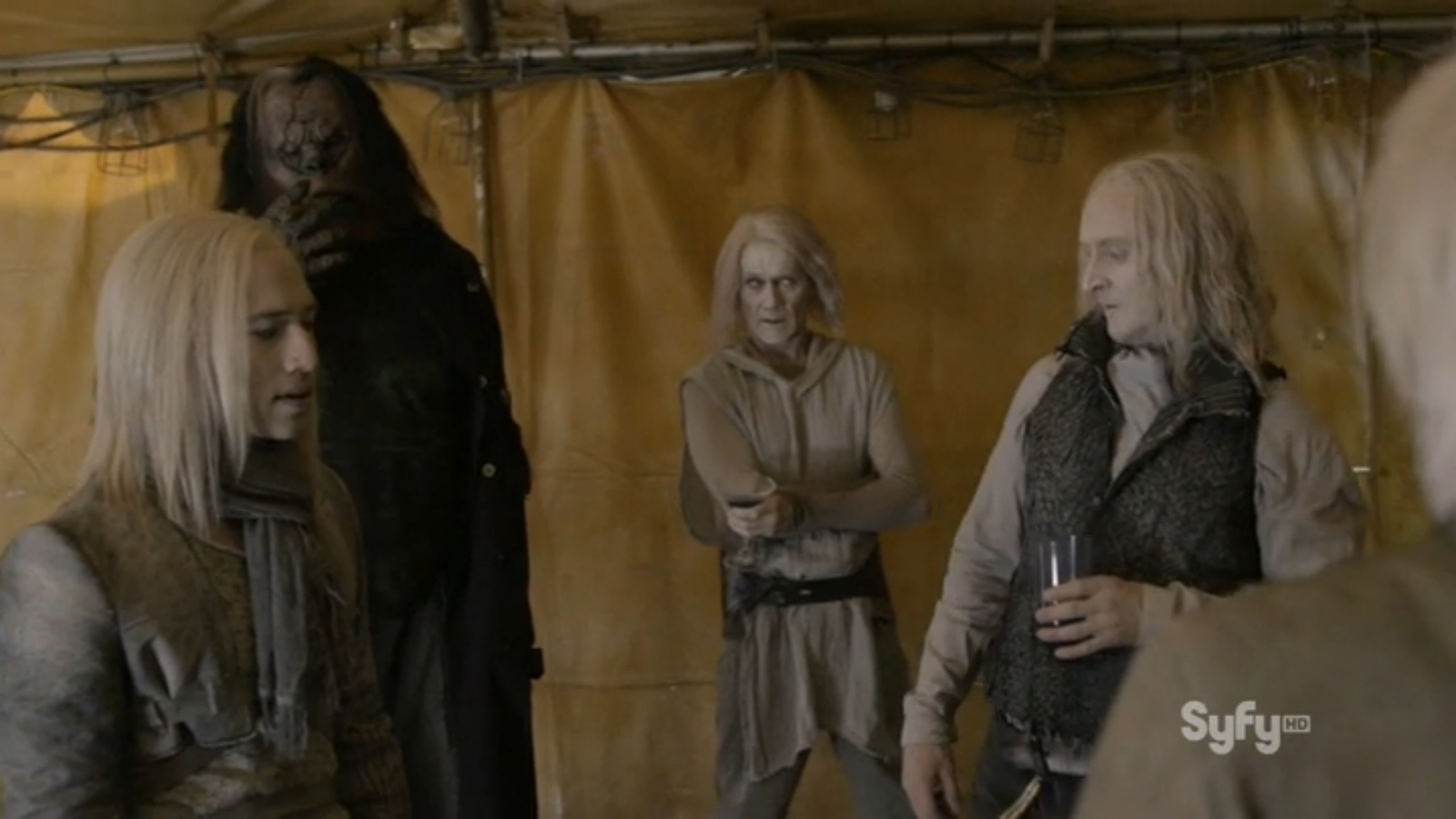 Somebody should have given Datak a copy of the Evil Overlord List to read in prison.

Rafe finds the red mask on the counter, and his kitchen full of mining equipment. The raiders were actually renegade miners, led by Joseph, the surviving brother from earlier this season. Every time we’ve seen him, he has behaved immaturely–spray painting “Kill the E-Rep” on walls, spitting on people, and helping the bomber. So it’s hardly surprising he’d try extra hard to look tough and then do something like that. But it also means he’s a moron, and Rafe smacks him upside the head for it.

Datak has breakfast with Alak, then gets confronted by two E-Rep soldiers, still upset over the death of Colonel Marsh. They try some role reversal with the black soldier tossing slurs at both Tarrs, but it felt rather tasteless. Datak manages to hold it together and doesn’t kill them, and apologizes instead. Strange…

Pottinger goes to apologize to Amanda for being rude (sensing a pattern here?) and ends up having a bit of a barfront confessional. James Murray, who plays Pottinger, does an excellent job here, and I’m impressed that the producers would even try to acknowledge the subject of male rape like this. It’s underrepresented in media, and when it does show up, it’s typically used for offensive “comedy”. It makes for a sobering moment where the realities of living in a lawless dystopian frontier world come crashing through. When you put that in the context of Berlin’s deconstruction of Nolan two weeks ago, it suddenly makes her appraisal all the harsher.

Nolan, Irisa, and Tommy go to see Doc Yewll, who’s looking over the dead E-Rep soldiers. Tommy spots Gulanite dust from the mines on one of the dead soldiers, but Nolan brushes it off (literally). Tommy flips out on him for destroying evidence and possibly covering for Rafe, and Nolan takes off. We then find out why those soldiers were messing with Datak earlier–Stahma paid them off to antagonize him into getting jailed again. Nolan shows up at Rafe’s, and Joseph points a gun at him, furthering his streak of bad decisions. Nolan takes it away easily, and arrests him, but Rafe guilts him into letting the boy go. He’s not happy about it, though, and Joseph’s not smart enough to take his cue leave town.

Datak yells at his men in the Fight Tent for listening to Stahma and tries to force Alak to kill one of them, but Alak offers himself instead. Datak’s impressed, but kills a random underling anyway. He’s clearly losing it; quite the fall from the scheming man we saw last season. 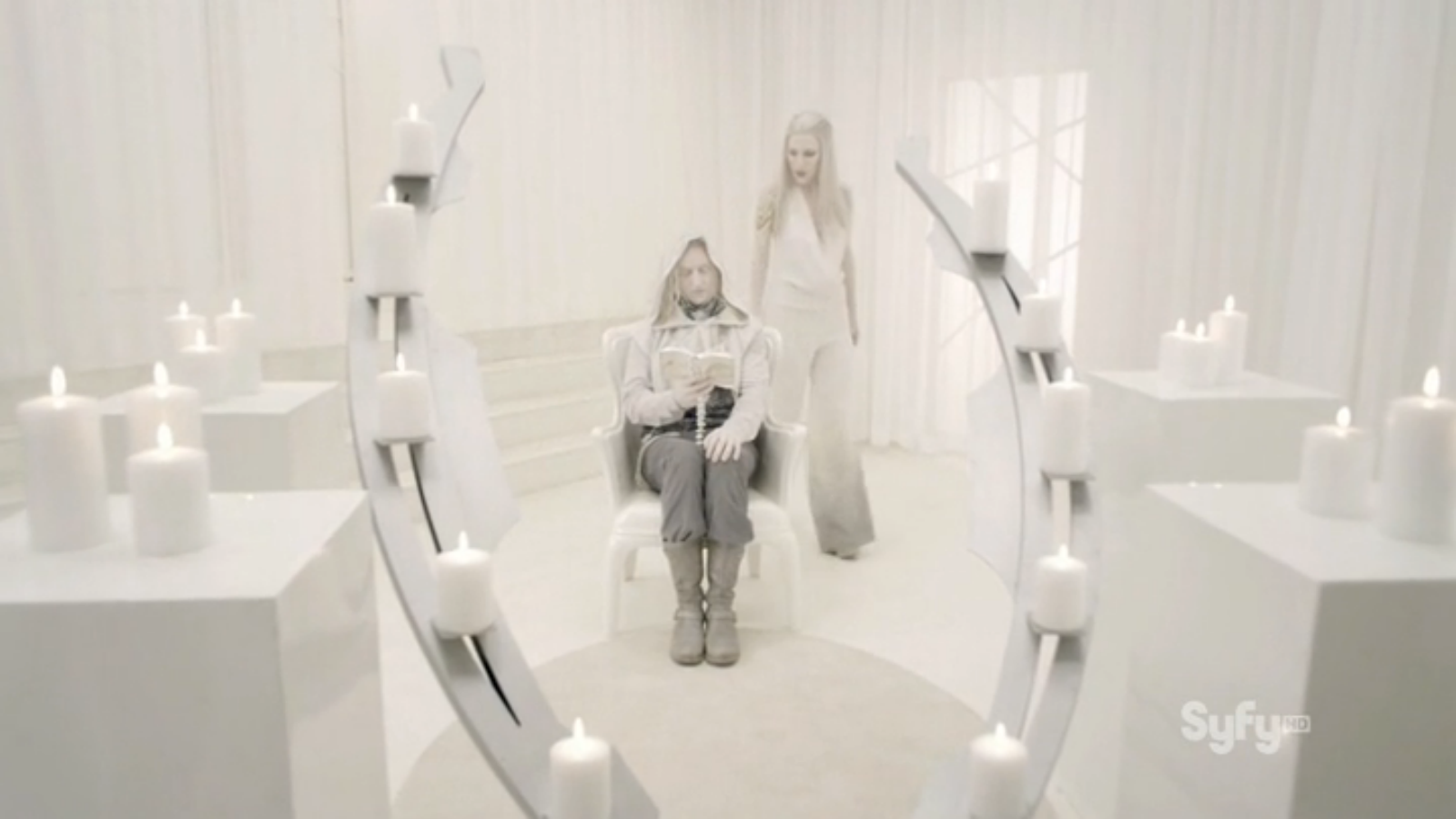 The Tarr family home must be a bitch to keep clean.

Rafe returns with a ticket for Joseph, but he’s gone. He’s not leaving town, however; he’s trying to steal the camera from Berlin, because he’s stupid like that. Berlin throws water at him and manages to see his face. Uh oh.

Amanda meets with Pottinger and opens up as they do drugs together. It turns out that she was also raped, by a man who snuck up and blinded her with a flashlight. Worse still, she was pregnant as a result, and had an abortion that completely destroyed her relationship with Connor Lang, whom we saw a few times last season. The scene is handled with the somber tone it deserves, and even gives her a valid reason for not coming forward. She seems to have dealt with it to some extent, since she’s able to have sex with Nolan without a problem, but it puts an interesting dynamic on the situation, with her being so physically close with him while also becoming emotionally close to Pottinger. It’s almost a cruel irony that she’s surrounded by sex all the time when running the Need/Want in this light.

Alak takes Datak to his record shop, where he explains how it works. Datak thinks it’ll make a good cover, and decides not to burn the place down. Then he shoves Alak’s hand into a machine and burns it instead. Yeah, he’s more than just a little unstable now. Both Christie and Stahma are furious about this, but for Stahma, it’s the last straw. She goes to talk to him, and sees him reading a Castithan bible that belonged to the priest he tricked in prison. Datak’s father was a religious man, so he’s always had a distaste for it, but now finds something in these pages. His newfound faith is unsettling, although how real it is remains to be seen.

Joseph, meanwhile, is still making poor life choices, trying to record Berlin saying their mining equipment would’ve destroyed the city. Nolan and Rafe show up right as he’s about to kill her, and save the day, with Nolan actually taking a bullet. Rafe drags Joseph outside, and realizing what’s in store for him, decides to spare him the pain and kills him. He clearly didn’t want to, and Rafe breaks down afterward. It’s another brutal scene in an episode that’s been packed full of them. 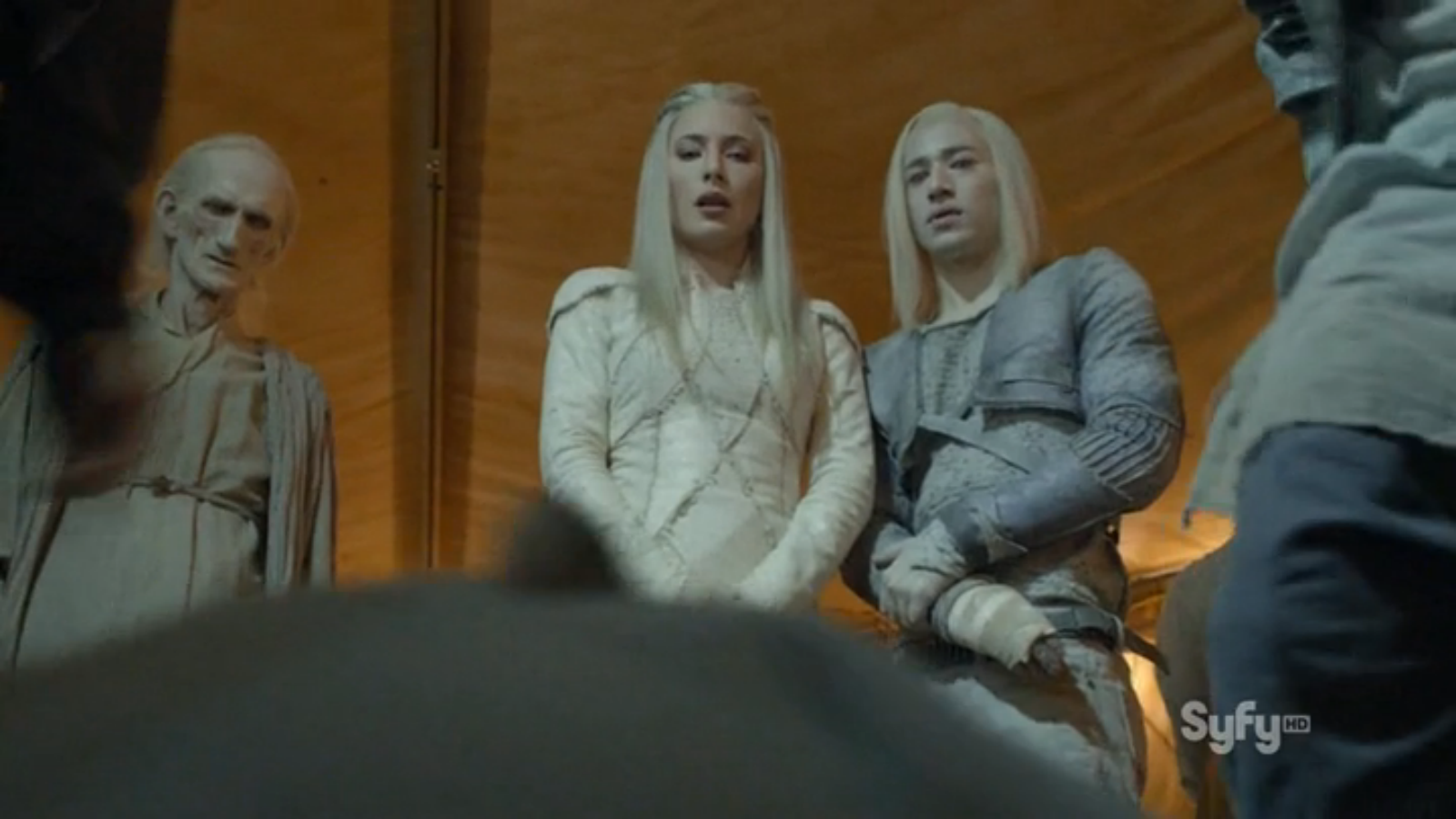 If someone goes to the trouble of assembling a mob to beat a man that hurt you, it’s only polite to watch.

In Doc’s office, Berlin assures Nolan that she won’t forget that bullet. It’s a good moment that reinforces this “bad guys are people too” theme that’s run through the season so far. Tommy has an underwhelming reaction to her safety, which is stifled even further when he learns what exactly happened. Rafe is evicted from living at the mine as a result of all this, and feels lucky that it’s only eviction. The episode ends with Datak walking into the Fight Tent for an intervention, except not the warm fuzzy kind–the “everyone’s going to kick your ass” kind, which is far less popular for some reason. Datak’s beaten up and thrown out face-down in the mud, with Stahma whispering, “you should have made me a partner.”

This week was somehow even more intense and densely packed than last, but it didn’t hit quite the same level. Then again, not every episode can be so well balanced. Pretty much everyone’s been through some horrible ordeal or relived one from their past this episode, and the sheer volume of trauma is almost overwhelming. It’s something that they’ll have to watch moving forward, but given that the preview for next week showed a masked man with a flashlight behind Amanda, I’m not so sure they will. Villainous characters with dimensions to them are what the show needed, but what they’ve chosen to add is something that must be handled very, very carefully. And I’m afraid that if they drop the ball on this, it’ll be enough to finish the show off for good.