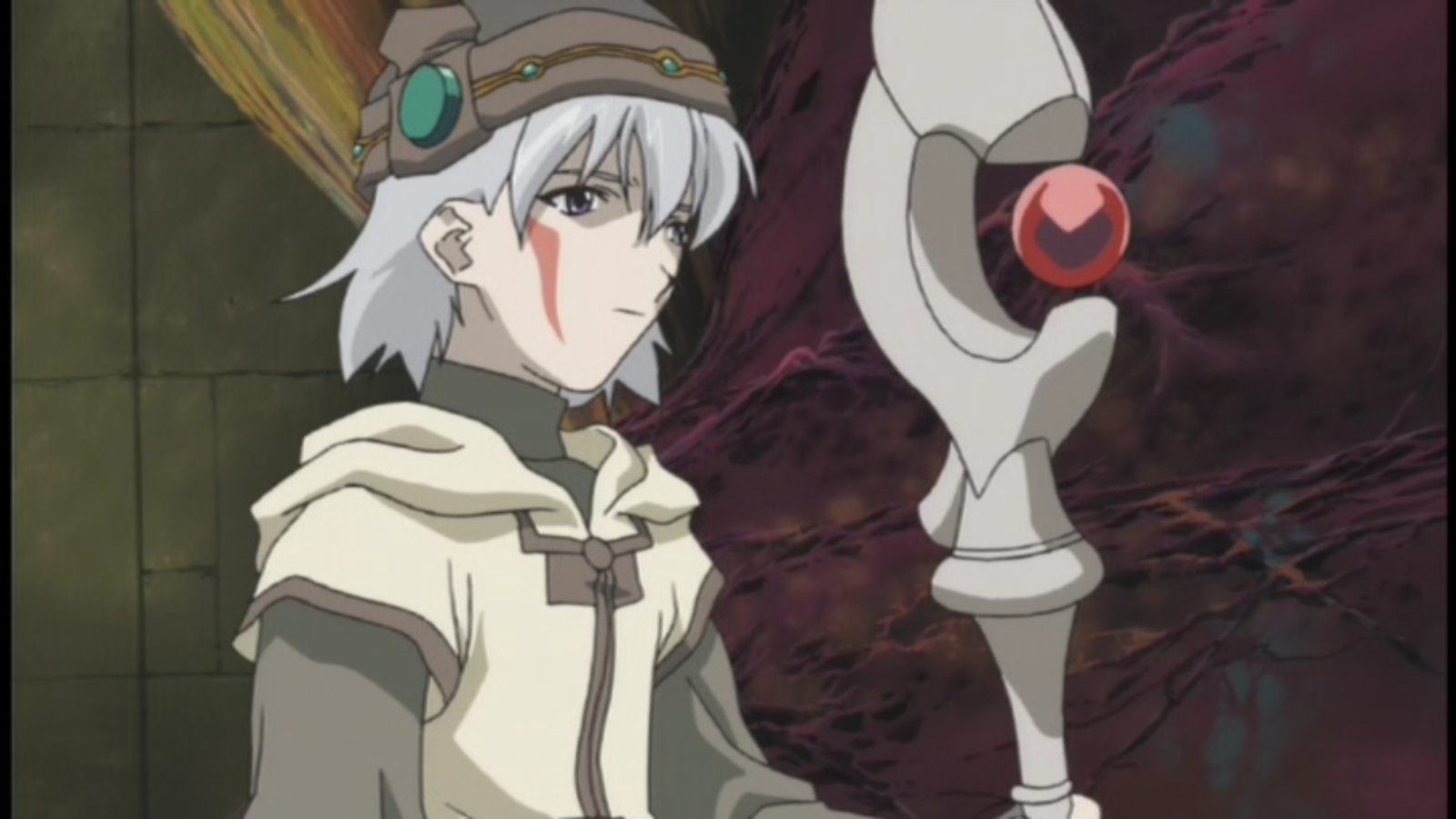 Defiance is often touted as a one-of-a-kind, groundbreaking multimedia franchise, the first time that a video game and a television series have been so closely tied together. But most fans of the show aren’t aware that a TV series tied in to a video game has been done before. And, of course, where better for such an experiment in cross-media storytelling to take place than Japan? Just over a decade ago, the .Hack// franchise emerged, all at once, across every form of popular Japanese media available. And while it probably wasn’t the first, it’s one of the best examples I know of where it began in multiple, connected forms instead of spreading out.

Now, there have been plenty of anime that have led to video games being created, and vice versa, but .Hack// is unique in that it was, from the beginning, planned to consist of many parts in many formats. The anime, .Hack//Sign (herein referred to as “Sign” for simplicity), emerged first by two months, followed by the first in a series of 4 related games, starting with .Hack//Infection, and then a serialized manga, Legend of the Twilight Bracelet, one month later. But all three were always intended to run concurrently; one can’t simply dismiss any part as a spinoff from another. And what’s interesting about this approach is that, while they all revolve around one central event, they each tell their own separate story that is enjoyable without requiring knowledge of the others.

To give you a brief overview, .Hack// is about an MMORPG, called “The World”, which is set in the (at the time) near future after a horrible computer virus destroyed most of the existing networks and systems. As the only MMO in existence, The World is wildly popular, but there’s something strange going on from day one. The game’s designer, Harold Hoerwick, had recently lost the love of his life in an accident, and decided to use The World’s access to millions of people to his benefit: to create, from the data gathered about humans, the child that he was never able to have. But as the AI, known as Aura, begins to come together, the consequences reach outside of The World and begin affecting reality. 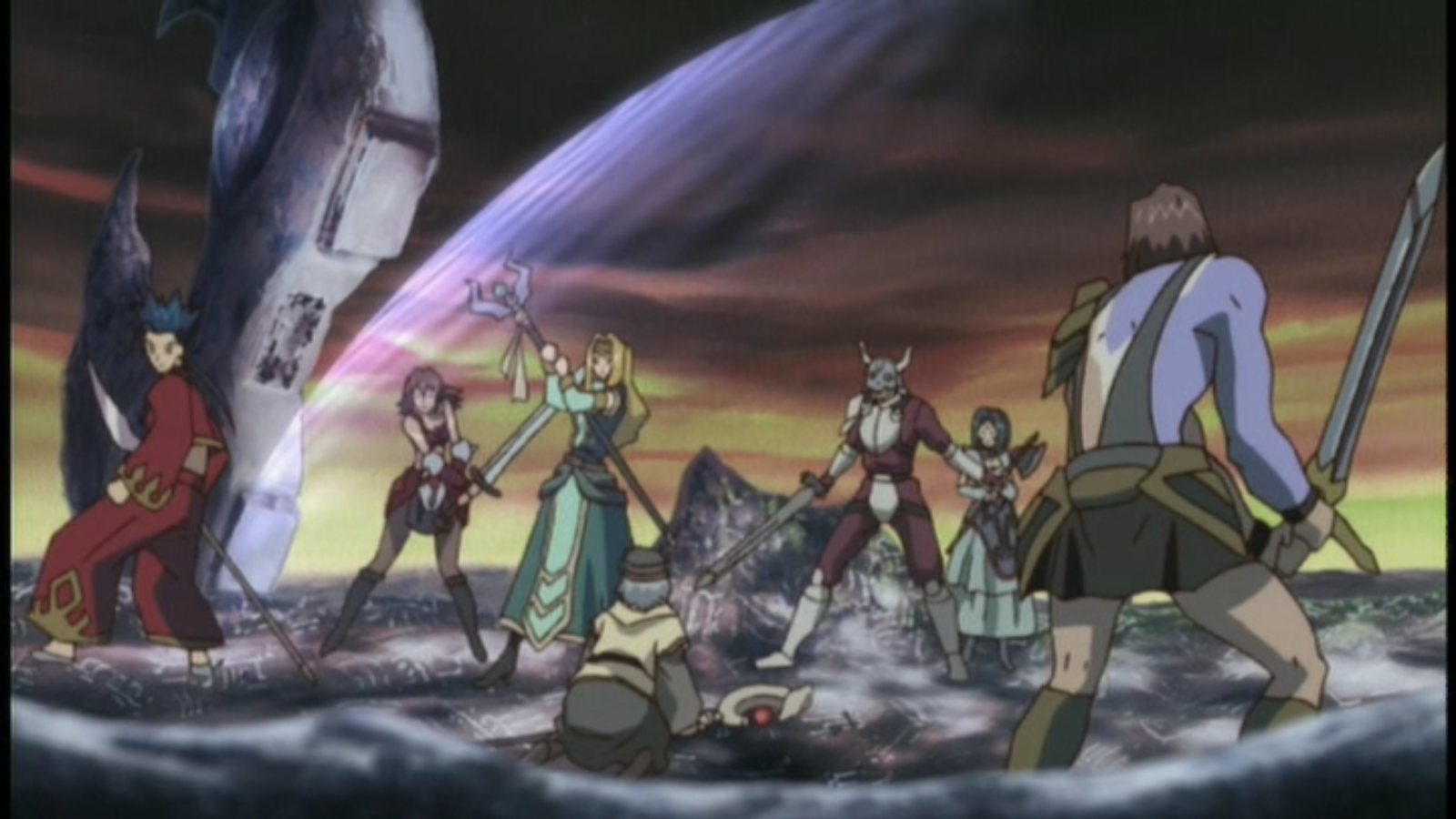 The characters of .Hack//Sign: (from left to right) Crim, Mimiru, BT, Tsukasa, Silver Knight, Subaru, and Bear. Not pictured: Sora, because he was being a douche at the time.

Clear enough; it doesn’t require as much backstory and alternate history as Defiance does, but it does still have extensively detailed lore in the same way. There’s both the fantasy-inspired in-universe lore of The World and the background of the actual .Hack// universe to dive into, in addition to the complexities that the various types of AI and other sci-fi aspects bring to the story. (Side note: if any of that interests you, go ahead and check it out. I highly recommend all installments of the original generation.)

And yet going through each of these stories in turn, I rarely felt like I was missing pieces that were key to understanding what was happening. But that’s a feeling that crops up in Defiance fairly often, such as with the Ego Implants in episode 5 of season 2, or the plague cure in episode 9 of season 1. So what did .Hack// do differently that Defiance could learn from?

Much like Defiance, .Hack//‘s stories focus on different characters doing different things, but rather than being separated by distance, the stories are separated by time. Sign, for example, is set before both the games and the manga, dealing with the character Tsukasa’s inability to log out of The World. A mysterious disembodied voice grants him several powers that make him a target to both administration and players alike. When all Tsukasa really wanted out of the game was a place to be left alone, he instead becomes the focus of a mystery that’s among the most popular discussion topics in game. Sign introduces us to some basics of how The World works, but mostly leaves it out, as it isn’t relevant to the story that it wants to tell. 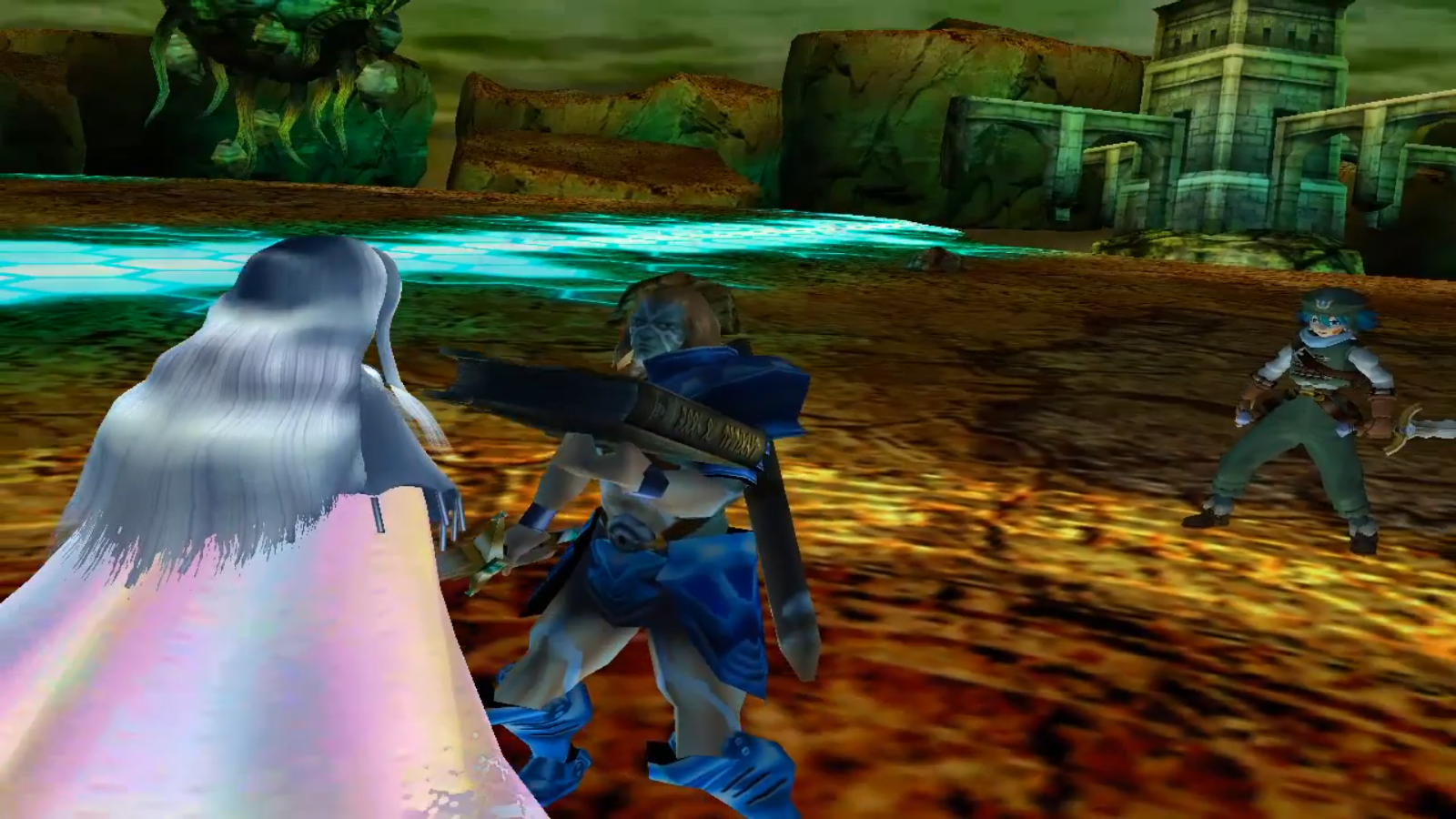 Orca (center) is about to have a very bad day.

In the games, we follow a newbie called Kite who’s being instructed by his famous friend, Orca, in the ways of The World, until Orca is taken out by a mysterious invincible monster. Kite is granted a special power that was originally intended for Orca, and when he learns that Orca was put into a coma in real life after dying in the game, he must enter The World that he knows nothing about to find out what happened and how Orca (and a growing number of other players) can wake up. There is some overlap with Sign in the first game–in fact, the starting events of the game are a direct result of the anime’s ending–but you don’t need to have seen it to understand what’s happening. Kite, the player character, knows nothing of Sign or its characters, so someone approaching the game without knowledge of the anime is simply placed into the same position as Kite. If you do happen to have seen Sign, then there are all kinds of bonuses that can be activated by recognizing characters or areas mentioned in the show, but they’re just that–bonuses. The story of the games is still 100% comprehensible without them.

So, while there is a big impact made by the anime’s characters on the game, it’s far less direct than what we see in Defiance. The mechanisms in the Defiance game that tie into the show often end up coming across as deus ex machina to those who don’t play. This happens most egregiously in the aforementioned plague episode, where the plague struck the region in which the game takes place first, giving the players a chance to find a cure and launch it on a rocket to the city of Defiance, where it becomes the macguffin of the episode. It’s almost a little patronizing; if no one had done that quest in the game, the episode would still have aired, and the plot would have unfolded in the exact same manner. It’s the same kind of fake praise used on preschool viewers of Dora the Explorer. Imagine rewatching that episode ten or fifteen years in the future–will it make any sense at all? No. It’ll just come across as sloppy writing which is excused by fans online as “it tied into an online game back when it first aired.” The show will be around far longer than the game will ever last, and events like this that exist only to boost interest in the game weaken it as a result. 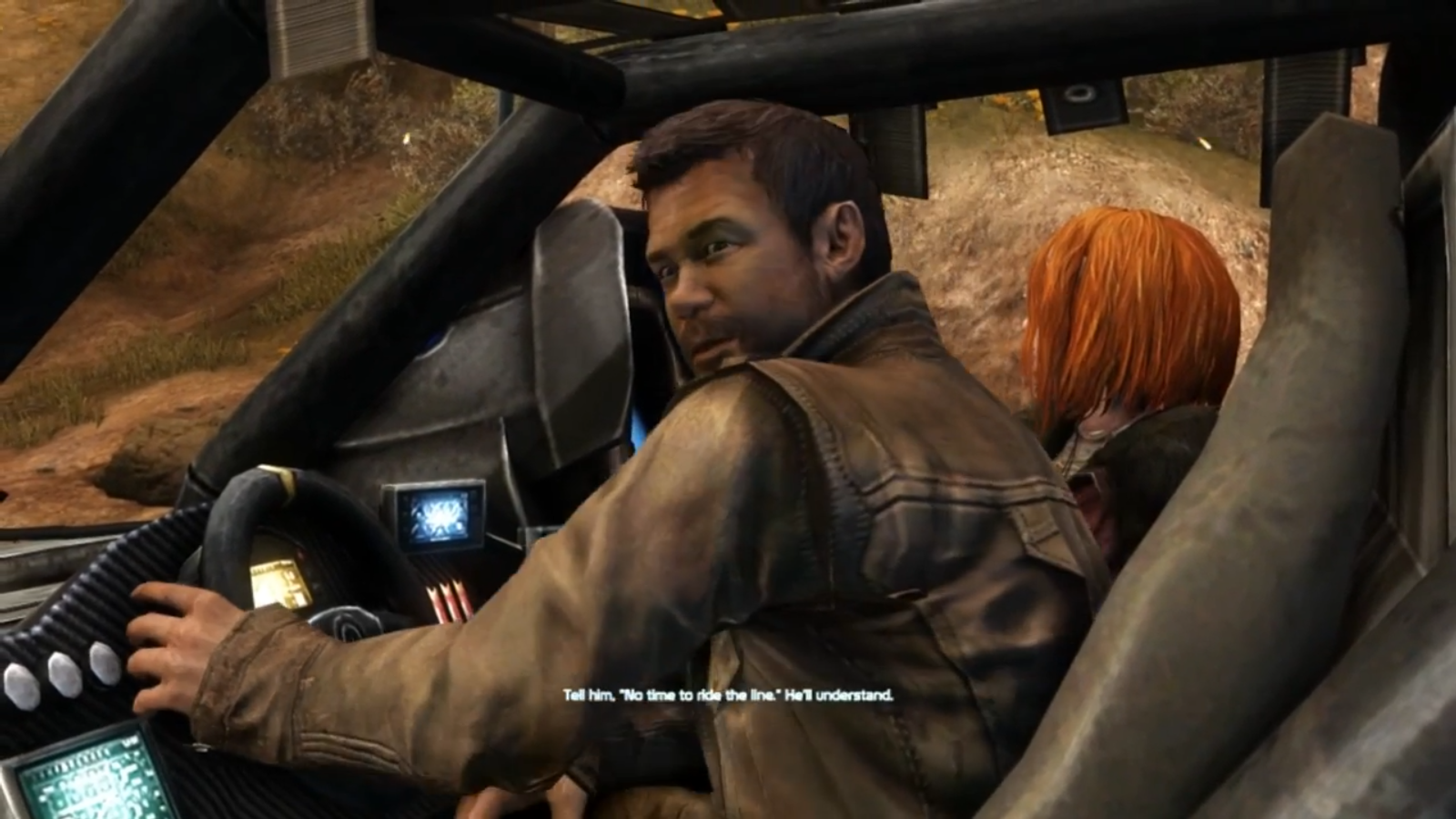 Isn’t it convenient that they happened to be nearby right before the show started?

I think that this, in the end, is what makes Defiance weakened by its cross-media storytelling attempts rather than strengthened by it. The game, by its very nature as an MMO, is both static and ephemeral. While .Hack// is set inside an MMO, it’s interesting because that static world is disrupted by the storyline; it’s an MMO that’s incapable of remaining untouched like an MMO should. Because you see, the world of an MMO can’t change too much. Not without forcing the removal of older content that any new players will then miss out on. It must leave the entire storyline, as shared thus far, accessible at all times. And that means that the story of an MMO world can never truly progress. The big bads can never be truly defeated–their minions must continue patrolling the same areas regardless of how many times you beat their boss, because not all of the players have. NPCs can rarely ever die, as they need to be standing in town for the next person who wants to embark on the quest. Cities and areas can’t just be destroyed or even damaged, because half the player base may not have made it that far yet. The only changes come during massive updates, such as World of Warcraft‘s Cataclysm expansion, and even then the changes that occur are not caused by the player. It’s all an illusion.

And yes, I’m aware that the episode-based tie-ins for Defiance had expiration dates, but that doesn’t mean the world is changing. That touches on the other part of the problem: the ephemeral nature of an MMO. Limited time events serve only to lock people out, but it’s not even about that–it’s the fact that the game itself will not always exist. While the .Hack// games, originally for the PS2, are certainly hard to find these days, they still exist, and will for some time. They’ll also be accessible through emulators long after the physical copies are gone. But an MMO? When Trion decides it’s not profitable to run the servers any more, that’s it. Everything in the game, the missions and characters and so on, will disappear. While a determined fan in ten years could, after watching Sign, go out and find a way to play the games, that would never be possible with Defiance. If some dedicated fan decided to set up a private server, then it could live on a little longer, but that can’t last forever. Sooner or later, it’ll just be another page in the annals of MMO history, a part of the story that no one will be able to properly experience again.

Let’s just hope nothing critical is lost along with it.