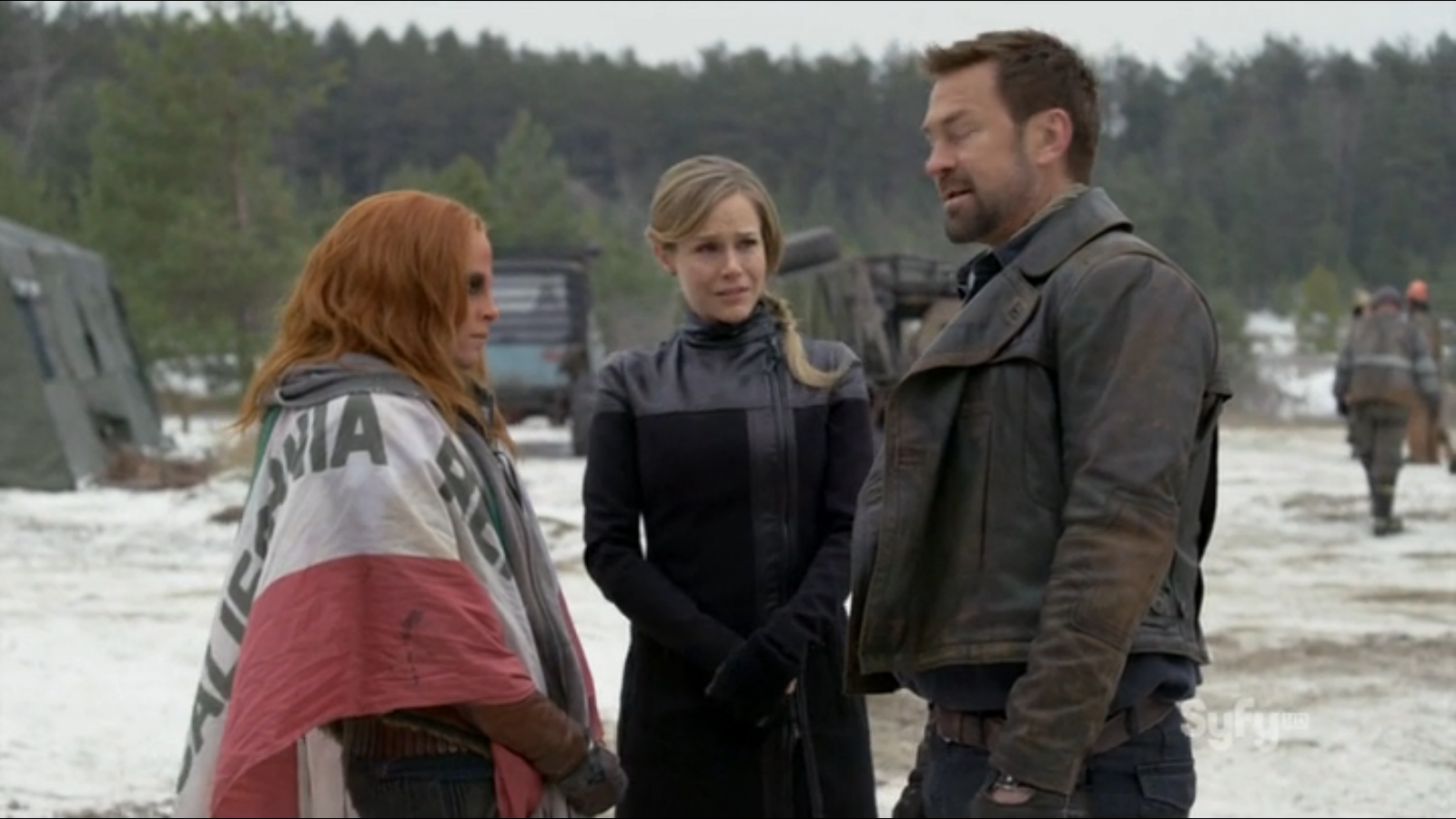 More returning characters, some brutal surprises, and the first time appearance of a woman we’ve heard quite a bit about all show up for the first of this week’s two episodes. The push towards the finale begins! But first, here’s an attempt at redemption.

We start off with Irisa breaking into an E-Rep facility to steal a Terrasphere, which is an object they used to wipe out the Volge back in the very first episode. She nearly gets caught, and it’s only by Nolan taking the sphere back and telling her to hide that she’s not caught. She tries to say she needs it to help Sukar with an illness, but Nolan’s had enough. He takes her knives, takes her badge, and cuffs her, and he doesn’t plan on letting her out of his sight. Frankly, it’s about time that he finally stopped playing around with this. Letting her roam around free is only encouraging her. Alak tells Treasure Doll that he’s done messing around with her, and she seems to take it poorly. 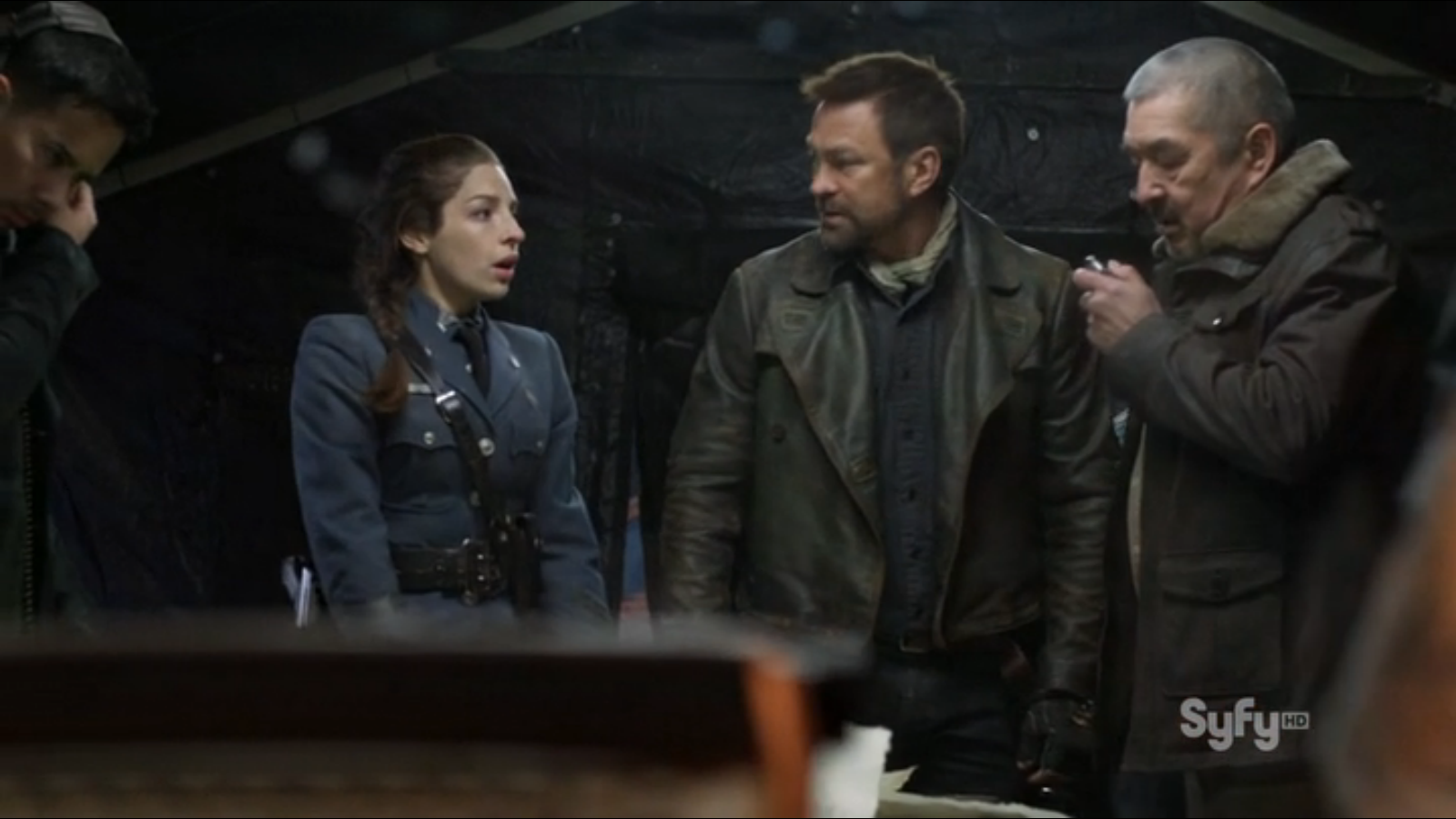 I’m always confused by Nolan’s actions. He’s often reckless and provocative, but just as often is worried about everyone’s safety, even if he doesn’t like them.

Ambassador Tennety, who was the scheming E-Rep woman with two husbands back in one episode of the first season, has come to town for a mine inspection. That’s what Ambassadors do, right? Inspect mines? She tries to make an insulting jibe at Amanda’s expense, but Pottinger shuts that down pretty quickly. Nolan, Irisa, Berlin, Pottinger, Amanda, and the Ambassador all go down into the mine, and an earthquake occurs, causing a cave-in. You get one guess as to who died in this little incident. Still, Amanda and Pottinger are trapped, while the first three manage to escape. They call in Rafe McCawley to help formulate a rescue plan. It’s a smart move, even if he isn’t the most sympathetic to him, because these are all things that are within his skillset, and no one could ever know the mines as well as he does.

Amanda and Pottinger check on each other, and Amanda tries fruitlessly to revive Tennety. She finds the Ambassador’s hailer and uses it to call Nolan, who she’s able to communicate with just long enough to make it clear they’re still alive. The rescue mission begins, and Rafe monitors as they drill very carefully to make an escape route. During this, however, they find something in the caved-in area: a Votan earthquake machine. Nolan confronts Rafe, suspecting it’s one of the miners, and though Rafe clearly recognizes the device, he doesn’t seem to know who did it.

While Nolan’s busy trying to rescue Amanda (and maybe Pottinger, but that’s no hurry), Irisa sneaks outside the tent and proceeds to break her own thumbs to get the cuffs off. You’d think just one would be enough, but she’s getting a little too used to her healing factor, apparently. She steals Nolan’s car, which is loud enough to get his attention as she speeds off. There’s not much he can do now, though, and so he returns his attention to the rescue mission. 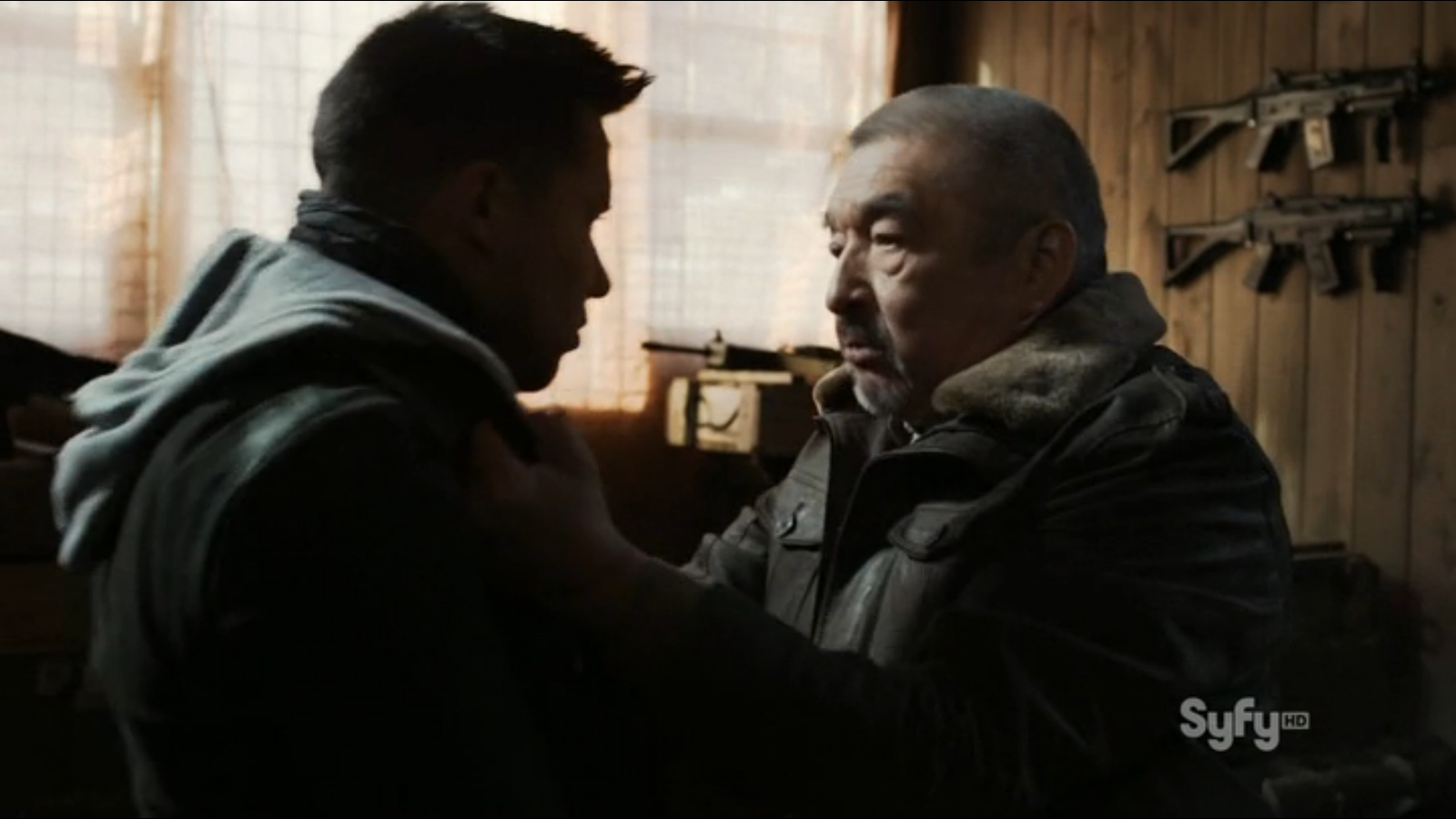 It’s a pretty coldhearted scene, and it shows a lot about Rafe’s character how he reacts.

Rafe confronts his son Quentin, who returned last week. Quentin admits that he set the device, which was stolen from the arms cache that Rafe and Datak had been building up in preparation for their rebellion. He’s been sent on a mission by the Votanis Collective, who are effectively holding his mother hostage in exchange for his cooperation on a few things–like “assassinating” an E-Rep Ambassador, and possibly the mayor, too. Rafe doesn’t take this very well, but that’s nothing compared to how Quentin reacts to his disapproval, which is beating his own father in the head with a pipe. It’s pretty brutal, and given how little we’d seen of his character, it comes out of nowhere. Quentin then comes up with a story about Rafe admitting to the attack and how he had to subdue him. Of course, this doesn’t fool Nolan, because despite his countless character flaws, he knows some bullshit when he sees it. But Rafe isn’t willing to throw his son on the chopping block, even if he is guilty, so he goes along with it.

Irisa arrives in town to ask Tommy for help. She tells him she’s dying, and that she needs the Terrasphere to survive. She also kisses him and pretty much does everything she can to guilt him into helping. Don’t worry Tommy, I’m sure there’s no way you’ll regret this. At the bottom of the cave-in, Pottinger and Amanda have been bonding, but they both know the air’s limited and yet they still can’t keep themselves from chatting. Pottinger actually goes so far as to tell her to kill him so that she’ll have more air and a better chance at survival, which really swings the ball back the other way after last week’s disappointing revelations. My only explanation for this is that Pottinger’s insane scheme with Kenya was something he came up with before they really got to know each other, and it’s only now that he has real feelings for her. And yet, there’s no sign of regret about his actions. It’s really hard to figure out just exactly where he stands sometimes. Still, Amanda refuses to do it. Pottinger, all you gotta do is tell her about your little Kenya experiments and she’ll be more than willing to bash your head in. 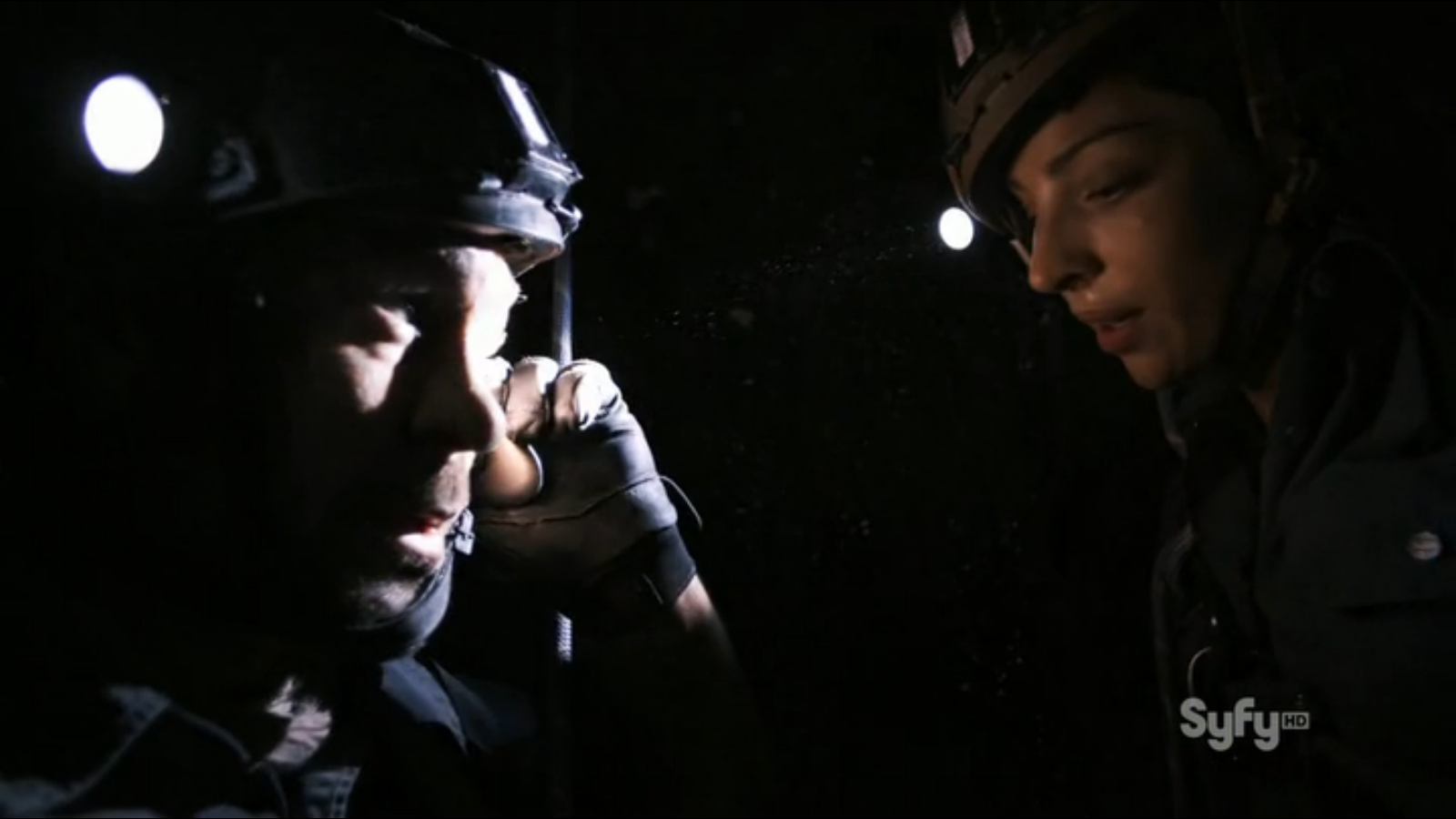 Poor Berlin. Another guy who’s already in love with someone else.

When Nolan and Berlin finally make it in, Pottinger’s unconscious, and Amanda tells Nolan to get him out first. There’s clearly been some honesty here, but we don’t have a clue as to what it was. So this complicated love–rhombus? I’m gonna stick with rhombus–finally makes its way out of the cave.

Irisa and Tommy arrive outside of town, after he steals the Terrasphere for her, where her army of followers is still waiting. She decides she’s going to add Tommy to the group, which seemed odd given that he’s human and Irzu doesn’t seem particularly keen on our kind. Still, it works–at least temporarily. Rafe is taken in, the VC release his wife to Quentin in exchange for successfully killing Tennety, and we get our first glimpse at Linda Hamilton as Pilar, who promptly calls her son an idiot. I like her already. 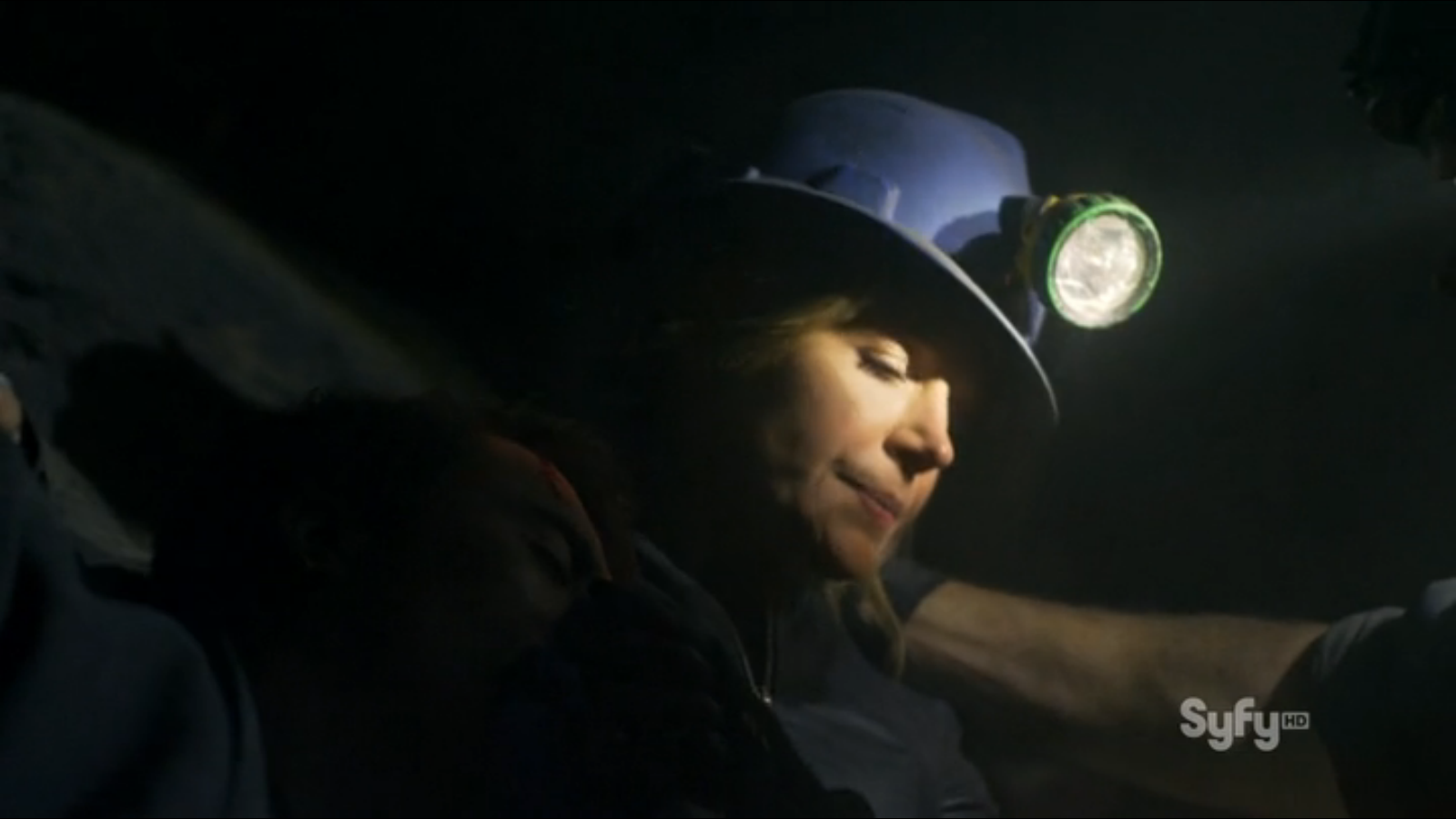 And they’re saved. But just what did he tell her?

It was a pretty good episode all around, with some good character moments for Amanda and Pottinger, as well as Berlin and Nolan, as the latter came to realize that his time with Amanda wasn’t “nothing serious” as he said last week. My first impression of the Amanda/Pottinger scene with the rock was that he very well might have told her the truth. Pottinger’s unconscious when Nolan arrives, after all, and once they’re clear of the tunnel, he tells Amanda that everything he said to her down there was true–but just what he said wasn’t shown. So I first thought he told her some modified version of the truth, where Doc Yewll had a much larger part in the experiment than she actually did, which seems like the kind of thing he’d do. On second viewing, however, I think he may have told her about his relationship with Connor Lang. I think my initial impression might have made for a more interesting revelation, but it doesn’t really harm the episode to have it the other way. It managed to keep all the important plots in motion in preparation for the finale next week. But that wasn’t all tonight, so continue on to the Season 2 Episode 11 review!