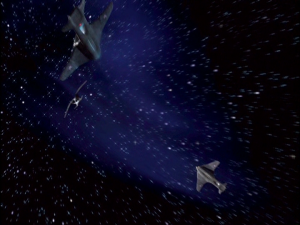 This month’s edition returns to a show that had its moment in the Obscure Sci-Fi Primer spotlight just a few months ago. Like so many other Fox shows, Space: Above & Beyond was canceled before it had a chance, after being yanked around by the network for a few months. From the start, the creators had hoped the show would last at least 5 seasons, which in and of itself is a pretty common desire for showrunners (5 seasons times 22 episodes equals 110 total, enough to secure syndication, which in the 90s is where the big money came from). And while this show is hardly a well-planned out 5 year arc like Babylon 5, the creators, James Wong and Glen Morgan, did have some plans for Space: Above & Beyond season 2 sketched out before the show was canceled (and even discussed the possibility of a theatrical continuation). So let’s dig in and find out where this very military show might have headed had it continued.

First and foremost, the finale wouldn’t have been as it was; had they known in advance they’d get another season, it wouldn’t have ended with nearly all the characters dead or in mortal danger. But even with the finale the way it ended up, there were plans to continue the story.

This is a woman who’d almost certainly die before being treated that way.

It just lacks a lot of sophistication that later CGI would have.

While the ending sounds great, a lot of these other ideas are clearly underdeveloped, which is forgivable given that everyone knew the show was doomed long before a second season was even on the table. Of the possibilities they considered, I think a wrap-up movie would’ve been a better option for this show than a second season, but if they managed to bring in some more interesting subplots like the conspiracy one from the first season, then maybe it’d still be okay. The only real problem I see with a wrap-up movie is how bad the CGI is in the series itself; if they’d done a movie, the graphic would have to be better, and that’d create a huge disconnect between series and movie. Other series that made the jump like Firefly or TNG didn’t really have this problem.

What do you think of these plans for Space: Above & Beyond season 2? Would a wrap-up movie have been better, or do you prefer the ending as is, in spite of its relative hopelessness? How about suggestions for future “What Could Have Been” pieces? Let me know in the comments, or on twitter @RetroPhaseShift. You can also subscribe to the “What Could Have Been” RSS Feed here.