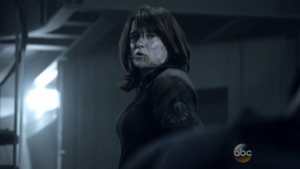 This week’s episode was action packed, and gave us a glimpse at a number of important events and people who we haven’t really gotten to know yet. Flashbacks, Gordon, the “real” S.H.I.E.L.D. and more await!

So this whole “real” S.H.I.E.L.D. deal that’s emerged, and which took center stage last week, has led to some interesting consequences. Surprise of all surprises, we got to see more of Hartley this week, via extended flashbacks to Captain America 2. Unfortunately, not much of that was character development for her, but it did enable Bobbi, Mack, and the other members of this second SHIELD some development to allay any fears that they might still be evil. We don’t know what was aboard this ship that was so important to keep out of HYDRA’s hands; I’d say given their treatment of Skye, odds are good it was superpower related, either prisoners requiring special containment or artifacts like the Berserker Staff that can grant superpowers. Whatever the cargo was, the question now is: does the second SHIELD still possess it? Or have they destroyed it?

The flashbacks themselves do an excellent job of re-establishing the kind of fear and confusion that we saw both in Captain America 2 and on SHIELD last year, and it made for a great way to get to the heart of these new characters. There can be no doubt about it now: this is going to be one very morally gray conflict. And yet, we know for a fact they’re not the rightful successors. The only exception, so far, is their approach to Skye at the end of the episode, but I’ll get to that in a minute.

Good guy? Bad guy? Or just interested in Inhumans only?

With the other SHIELD getting the drop on Coulson’s team, we’ve got some big consequences. Hunter is back in play, as Coulson’s only man he can trust, a pretty huge shift from the position he was in before. Pitting him against Bobbi ought to make for some very interesting drama in the weeks to come. Both Fitz and Simmons had some good moments as well, with Simmons having gone from a terrible liar in season 1’s “The Hub” to passing for HYDRA earlier this season to actually fooling Bobbi, whose ability to pick up on lies has already been heavily showcased. Fitz has been betrayed yet again, but this time the traitorous friend actually turned around and saved his life immediately afterward. That’s going to bring out some really complicated feelings he’ll have to deal with in the near future. Not to mention, the team of FitzSimmons seems to finally be reforming. And Coulson, well, he’s just lost everything for the third time.

Which brings us to Skye. She seems to have been taking her isolation fairly well, and given what we know now, it’s likely the goal of this isolation was to protect her from other-SHIELD in the first place. (As an aside, the Hulk shoutout here was pretty cool.) Keeping that from her may be a problem, however, and May’s unclear explanation over the phone has set her up for a confusing situation that has thrust her right into the Inhumans’ hands. But is that a bad thing? Gordon seemed very friendly and reasonable. Sure, the first thing we saw him do was save Raina, but it’s clearly because she’s one of his people and not because she was a bad guy. He’s definitely not on Cal’s side, nor does he seem to have any reason to sympathize with HYDRA. At this stage, pretty much the only reason he might end up opposed to Coulson and the team is if he’s anti-human in some way. And heck, even his little chat with Skye has already helped her to harness her powers to some extent. Meanwhile, between May’s call and the man shooting at her approaching alongside Bobbi, Skye has every reason to believe SHIELD’s turned on her completely. Whether Gordon would have pulled some kind of manipulation or not, he didn’t have to; the other SHIELD pushed her right into his arms. 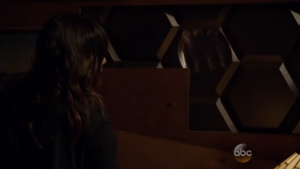 Knowing the walls are made of Vibranium makes it all the more impressive.

The other SHIELD’s approach towards enhanced individuals seems to be at the heart of what makes them different from Coulson’s SHIELD. Even after Bobbi explicitly told them to only use icers against Skye, we can clearly see that both the random henchman and Agent Jerkass (Alvarez?) fired real guns at her. Combine that with their words on the ship, and Bobbi and Mack’s stance towards Skye during the arguments in the midseason premiere, and it’s clear that they see superpowered individuals as a threat to be destroyed and nothing else. While Coulson’s team is taking a more nuanced approach to the issue, we really don’t know what side they’ll end up coming down on, be it containment or something else. Facing off with Raina, Gordon, and the other Inhumans is going to force them to decide, and soon.

Some slight Avengers 2 spoilers and Cap 3 speculation ahead:

If you’ve seen certain clips and trailers for the upcoming film, you know that Cap and Tony have a discussion while chopping some wood about what their goal is in all this. Tony insists that his goal is to beat the bad guys once and for all, so he can just go home and hang up the suit. Cap realizes that there’s just no chance that will ever be possible; there will always be new bad guys, and it’s their lot in life, as the heroes, to fight. While it kind of explains his motives behind creating Ultron, it’s clearly meant to foreshadow the upcoming divide between the two characters in Civil War. I think that this division between two branches of SHIELD is meant to do the same thing, and this might actually be revealing what the core conflict of the MCU version of Civil War will be. I’m still not convinced that this other SHIELD is totally unrelated to Stark’s agency that Maria Hill was working for. If it is, that’s a far more direct tie and a solid connection supporting this Civil War theory. Still, at this point, it’s only speculation.

This was yet another great episode with important repercussions for the future. Getting to see the other Inhumans, and possibly Raina again, is an exciting prospect for the coming weeks, and the conflict between SHIELDs will undoubtedly be entertaining. And the effects, as usual, were spectacular, particularly Skye’s powers at the end. Next week, “Afterlife,” which is a really ominous title.