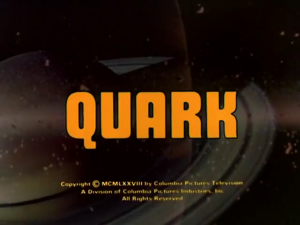 As we emerge at last from a dreadful period where Star Trek did not grace our television screens, it’s time to look back at another such dark era–the 1970’s. While Star Trek had yet to return (though not for lack of trying), it still held a strong presence in the public consciousness through syndicated reruns, and out of that building popularity came the spoof series Quark, from the mind of Get Smart creator Buck Henry. Yes, long before the Trek fandom’s beloved Galaxy Quest, there was another affectionate parody that just so happened to emerge right at the time of the Star Wars-led sci-fi boom. Quark managed only a meager 8 episodes, but one has to ask: was it really so bad, or was it simply too niche to find a large enough audience? Let’s find out. 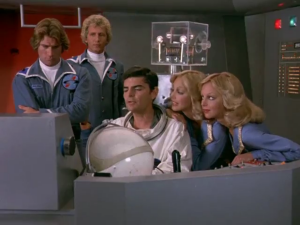 The show follows Adam Quark (Richard Benjamin), whose name was no doubt chosen as much for sounding like “Kirk” as it was for the scientific connotations. Commander Quark isn’t quite the intrepid space hero he’d like to be, instead saddled with the unenviable task of being an intergalactic garbage collector. His misfit crew includes Ficus (Richard Kelton), a plant-based “Vegeton” who is so emotionless and verbose that he makes Spock look like a kid with a sugar rush by comparison; the Betties (Cyb and Patricia Barnstable, the “Doublemint Twins”), a pair of beautiful blondes who are totally in love with their Commander, the only problem being that one’s a clone and no one is sure which; the “transmute” Gene/Jean (Tim Thomerson), whose genderfluid nature emerges as a split personality–an overly aggressive, macho male side and a demure, polite female side, each of which always manages to manifest at the wrong time; and Andy, a robot built by Quark that’s even more cowardly than C-3PO and more willing to sell out his crew than Rygel from Farscape. The pilot episode features a McCoy-like character called Dr. Mudd, who was replaced by Ficus for the main series. Quark also gets his orders from Otto Palindrome (Conrad Janis), who serves as the assistant to “The Head,” a literal disembodied head with an enormous brain. Not exactly the people you’d want to take with you when you’re going against the Dreaded Gorgons (a mix of the Empire and Klingons).

The pilot is fairly different, as it debuted in 1977 just before Star Wars swept the stage; with Quark primarily aimed at spoofing Trek, it looks like the show was retooled between the pilot and episode 2 in order to take shots at Star Wars as well. Andy’s cowardice doesn’t really manifest until that second episode, for example, and puts him much more of a parallel to C-3PO. But the show stayed close to its roots, directly parodying several Trek episodes, such as “The Ultimate Computer” in “Vanessa 38 24 36” and “Shore Leave” in “Goodbye Polumbus.” 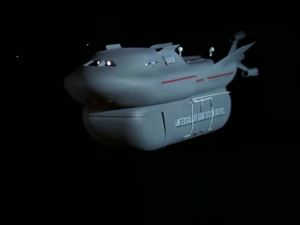 In the end, I’d say Quark was definitely on the “too niche for network TV” side of the equation. Had it been possible for it to debut on cable where smaller audiences could keep it afloat, it’d probably have been a decent success. In an added twist of irony, the show aired on NBC, much as Star Trek had years before, and was unceremoniously canceled in much the same way. No letter writing campaigns this time. While the show has only 8 episodes, they’re in a half-hour format (except for the double-length episode 2), so it’s a quick and easy watch, and definitely one that’s worth the time investment for Trek fans.

3.5 UFOs. Definitely a cult classic, but a quality one.

A quick reminder of my rating system: a 5 represents must-see–a “hidden gem,” as it were. A 4 is good, solid television. A 3 is “cult classic” stage, where the show’s appeal is likely limited to a specific group. A 2 is flawed, but fun, or even “so bad it’s good,” depending on the series and its release timeframe. A 1, of course, is avoid at all costs. Quark is not available on the major streaming services (Amazon, Hulu, or Netflix) and the DVD had a small release, meaning it’s… prohibitively expensive. Just look below. So in that event, the best I can offer you is this youtube channel, where it’s viewable in decent quality. Check out one of the recommended episodes above and see what you think.

Have any suggestions? Or are there any little known shows you’re a fan of that you’d like me to cover? Leave them in the comments, or send a tweet to @RetroPhaseShift. To be notified of the next entry in the Subjectively Obscure Sci-Fi Primer, you can subscribe to the RSS feed by clicking here.