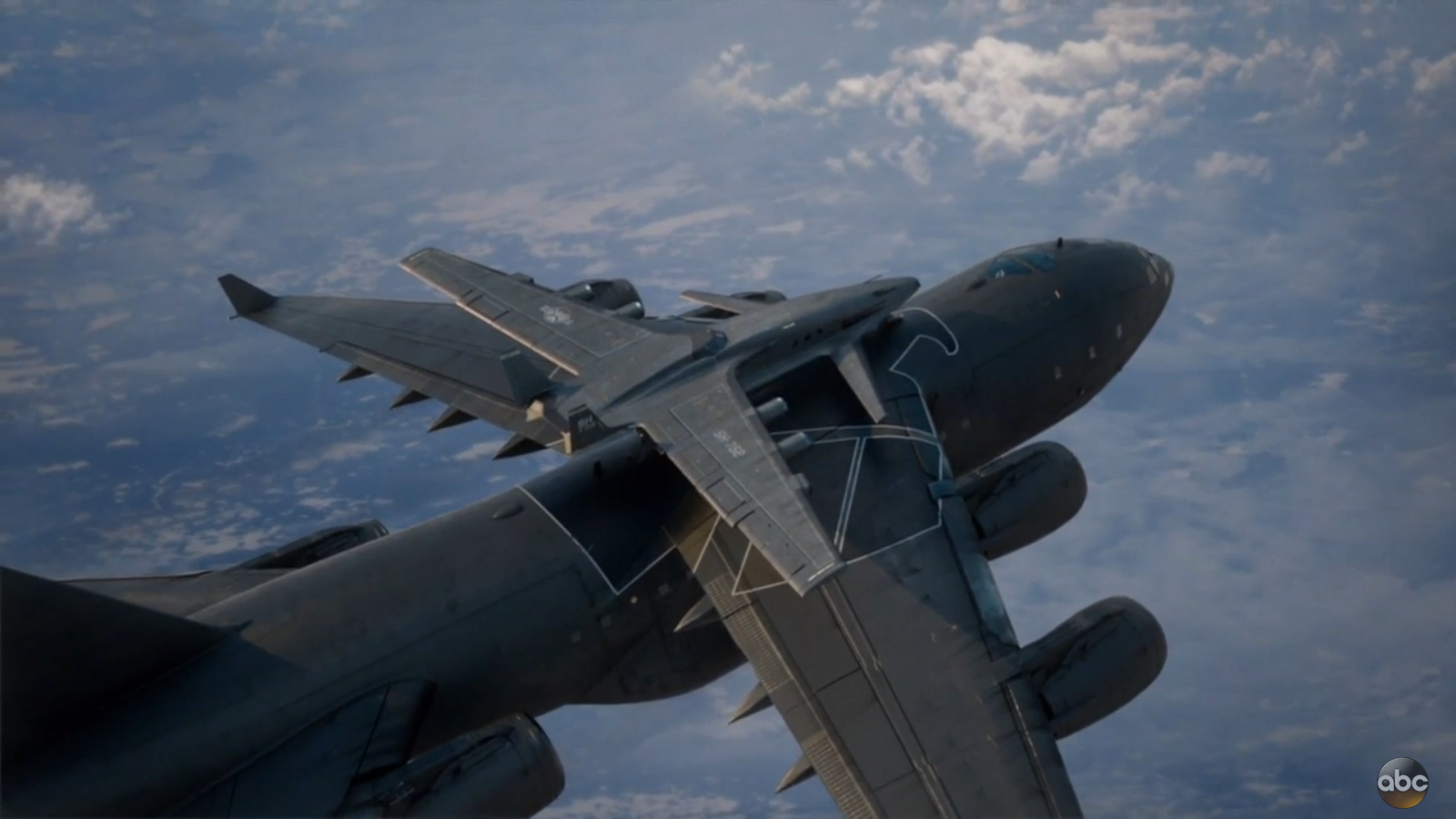 Agents of S.H.I.E.L.D. was heralded upon its arrival as something revolutionary. A television series, set in the same universe as films, affected by the fallout of each one as they were released while allowing viewers to keep an eye on this world in the interim. It’s something not too different from how Defiance‘s MMORPG connection was described. And, much like with Defiance, it’s something that actually has been seen before, although few people tend to think of it in the same way. This time, however, it’s a much better known property: Star Trek. You see, when The Next Generation started in the 1980s, the feature films with the TOS crew were still being produced. Let’s take a look at some of the significant differences between the approaches of these two series and how the concept of a shared universe has evolved.

Now, the basic idea of crossovers is nothing new; even the ancient Greeks did that, most notably in the story of Jason and the Argonauts. But it is only recently that these cross-media stories have started to become common, as part of the push towards franchise formation. If you have any familiarity with Star Trek, then you know that TNG is set roughly 100 years after Kirk’s time. This allowed the writers of the show some free reign to do as they pleased without having viewers constantly ask where Spock was and what Kirk was up to, as well as making major changes to the political layout of the universe (such as the Federation and Klingons being allies in TNG) without requiring a lot of explanation. But it was complicated, at first; with the TOS movies still going on, often with a degree of uncertainty to them, the writers of TNG couldn’t talk too much about Kirk’s time without stepping on some toes. When Star Trek V came out, TNG didn’t really acknowledge it in any way (which is probably for the best, given how the film turned out). It wasn’t until Star Trek VI: The Undiscovered Country was released that we saw the first real crossover between film and a TV show. 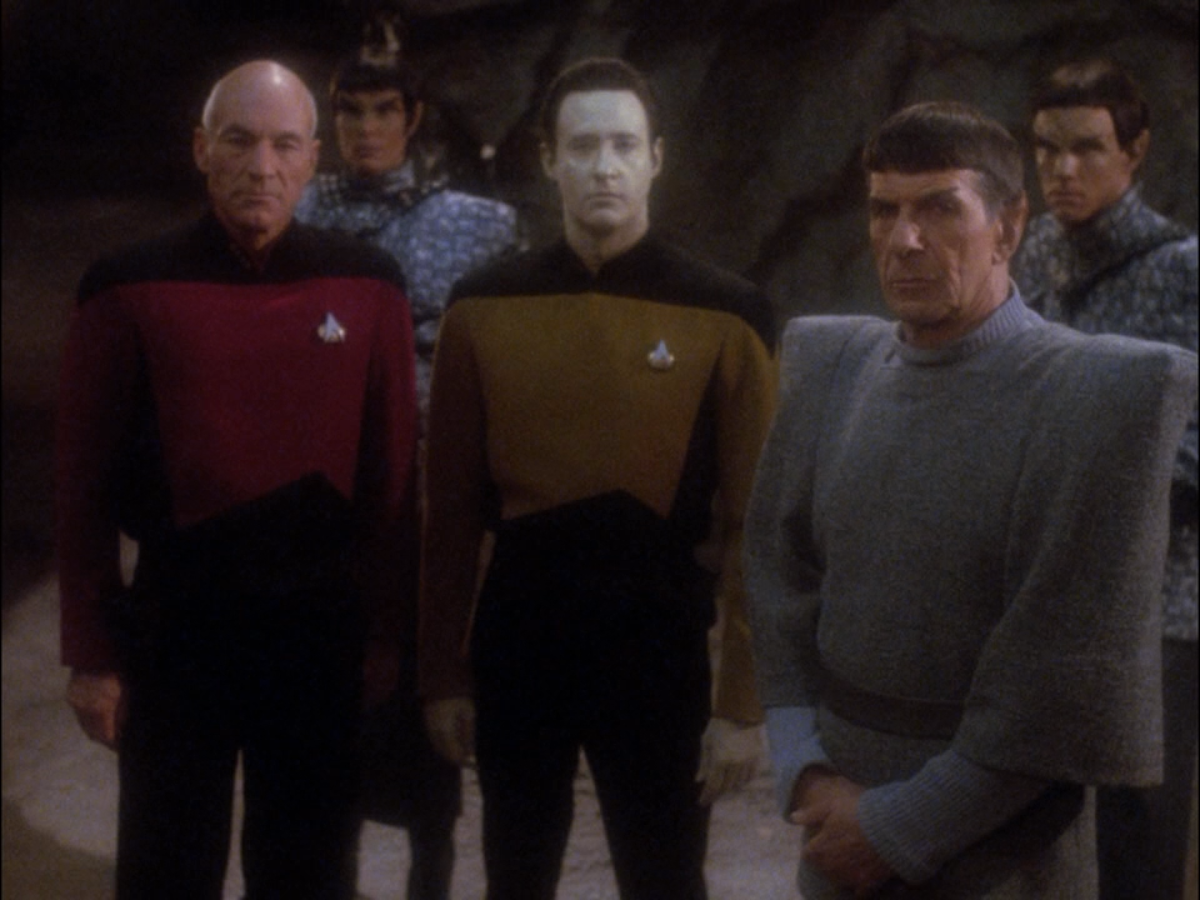 The team-up everyone had been waiting for. Honestly, this is one of my favorite episodes for a lot of reasons.

In order to promote the film, the producers (Nimoy among them), decided to try having a TNG episode featuring one of the original crew. With Spock already the most popular character and the one with the best reason to still be alive a century later, it only made sense to have Nimoy be the one to appear. He actually agreed to work on the show for SAG’s minimum pay solely to help the film. And it worked excellently, pulling in over 25 million viewers who were eager to see Spock and Picard team up. Spock provided some tantalizing tidbits of history about the upcoming movie, people were hyped up for its release, and the film ended up being quite the success. It wasn’t the first crossover, as Spock’s father Sarek had appeared earlier on, but it was by far the most significant. The film reciprocated the gesture by having Kirk and McCoy’s Klingon defender in the courtroom scene played by Michael Dorn, marking the character as an ancestor of TNG main character Worf. Having seen how successful it could be, these kinds of crossover references continued into the future, such as with the appearance of Deep Space 9‘s U.S.S. Defiant in the TNG film First Contact, and the change of uniform over on DS9 to match with the new uniforms seen in that film. In these early days of franchise formation, however, there were few opportunities for other series or films to do the same, so the phenomenon stayed more or less confined to Star Trek. 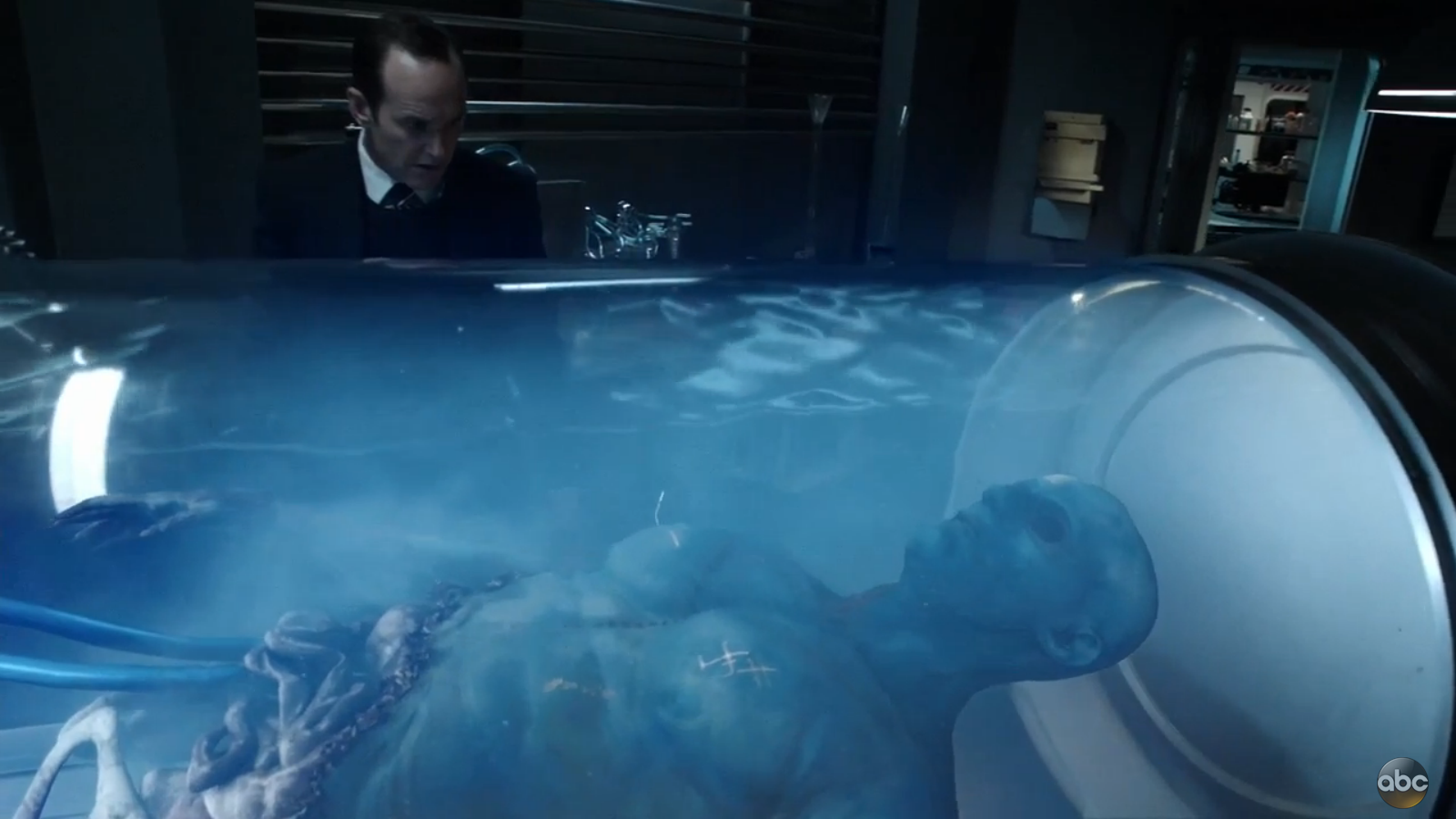 The Alien Humanoid In The Icebox (T.A.H.I.T.I.)

Flash forward to today, where big franchises have become the norm and Marvel has taken great strides to prove that the shared universe is a viable film option, and things appear quite different. Wanting to expand from the realm of film, Marvel executives finally settled on the idea for a show focused on the S.H.I.E.L.D. organization from the films, and thus Agents of S.H.I.E.L.D. was born. The show, henceforth referred to as SHIELD because those dots are a pain, is essentially a spinoff focusing on Agent Coulson and a team he builds to deal with the weird occurrences of the Marvel universe. Of course, the big difference between SHIELD and TNG is that the films and series are taking place concurrently.

So what difference does that make, then? Well, for starters, it means that SHIELD can’t just ignore a movie, the way TNG did. They have to acknowledge it, because with the level of destruction that typically accompanies a modern blockbuster it’d break the suspension of disbelief wide open to ignore it. And secondly, because of the way that SHIELD was spawned, its purpose is to help support those films. So, even for something like Guardians of the Galaxy that takes place thousands of lightyears away, it must have some sort of connection. This is where it gets complicated–by being so tied into the films, the writers have nowhere near as much freedom as those on TNG.

Still, the show was successful enough to convince Marvel to take on several more, from Daredevil and its fellow Netflix shows to Agent Carter, another ABC program. But why are TV series so valuable to what Marvel is doing? Why not keep TV separate, like DC has? A few reasons: 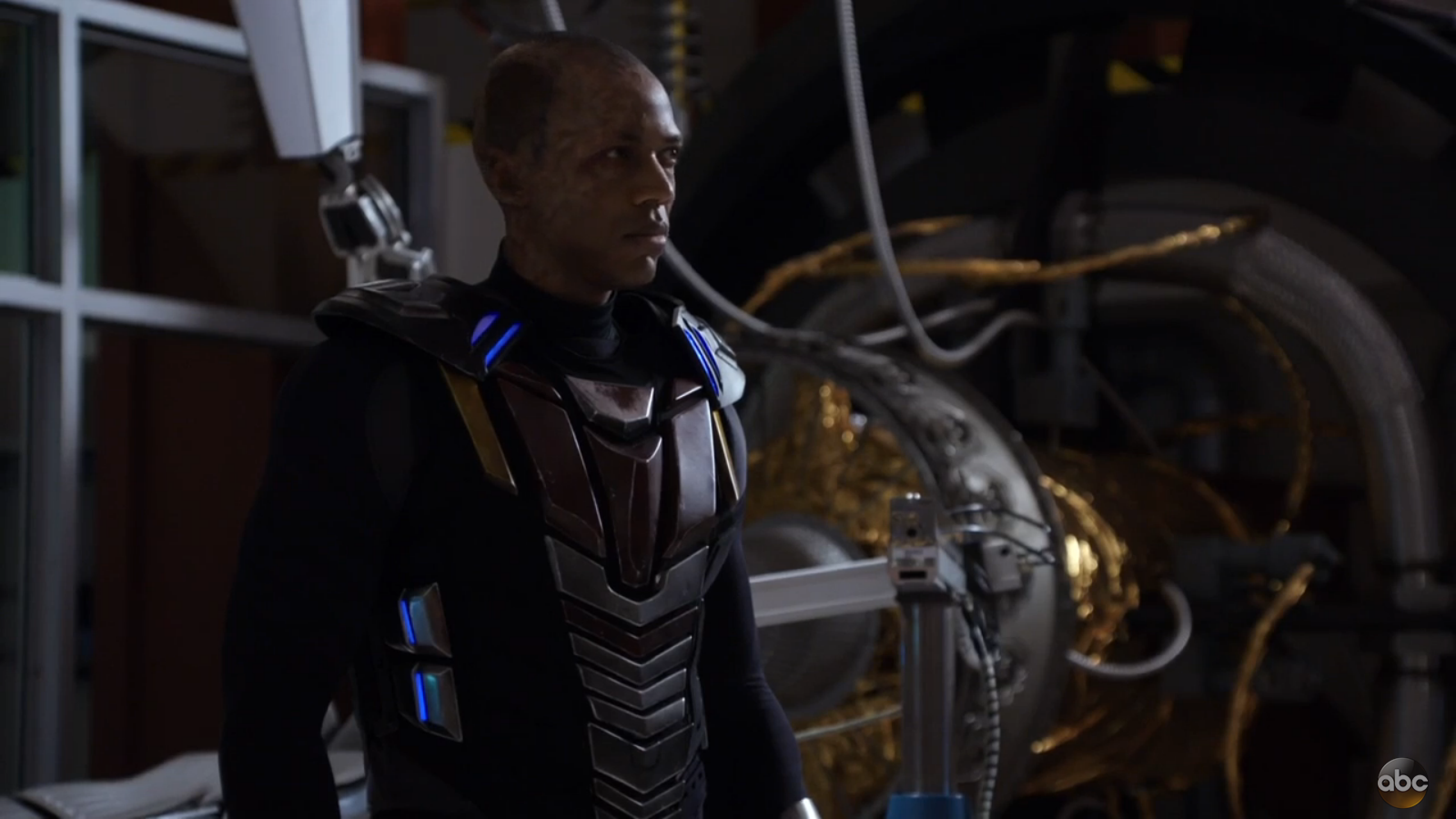 Was anyone really expecting Deathlok to be a major part of SHIELD? Had you even heard of him beforehand?

“Should we show our awesome new ship fighting in the war? Or just screwing around with diplomats?”

Naturally, this kind of thing has some problems, too; the producers were well aware of the possibility of people asking “why don’t they just call Iron Man for help?” Star Trek also faced this issue, during the period where the TNG films were in theatres and DS9 was still on the air. Late seasons of DS9 focus on the Dominion War, which is briefly mentioned in one film (Insurrection) but otherwise conspicuously absent. In this case, it really did leave one wondering where the Enterprise had been and what they were doing for the whole war. There is a throwaway line stating that the Enterprise has been on diplomatic missions, but it’s a rather transparent excuse that exists solely to imply to the audience “don’t worry, you didn’t miss much.” And if you ask me, Insurrection really missed an opportunity by ignoring it. Rather than the weak immortality plot, it could have been about rogue Starfleet admirals trying to evict these aliens in order to create some kind of superweapon to use against the Dominion. It’s not a huge change, and it would require slightly more context, but not enough that people unfamiliar with DS9 would be out of the loop. Just open the film with the Enterprise in battle and show the kind of losses Starfleet was suffering. It would have been a lot more convincing and morally gray than what we did get.

SHIELD decided to tackle this problem by making it so that the problems dealt with by the team are both smaller in nature, and often occurring in secret. The Avengers aren’t allowed to know that Coulson is still alive, and they aren’t privy to upper level classified information, such as the information on metahumans. They also made it clear from the beginning that the show was to be about what value ordinary humans held in a world of demigods and super soldiers. Now that the lid’s been blown off, however, it should be interesting to see how they deal with this shared universe. With no movies scheduled for release during the second season (Avengers 2 should be right around the time the season ends), the SHIELD writers will be less tied down than before. But can they make the best of this newfound freedom? We’ve got a little under a month until we find out.