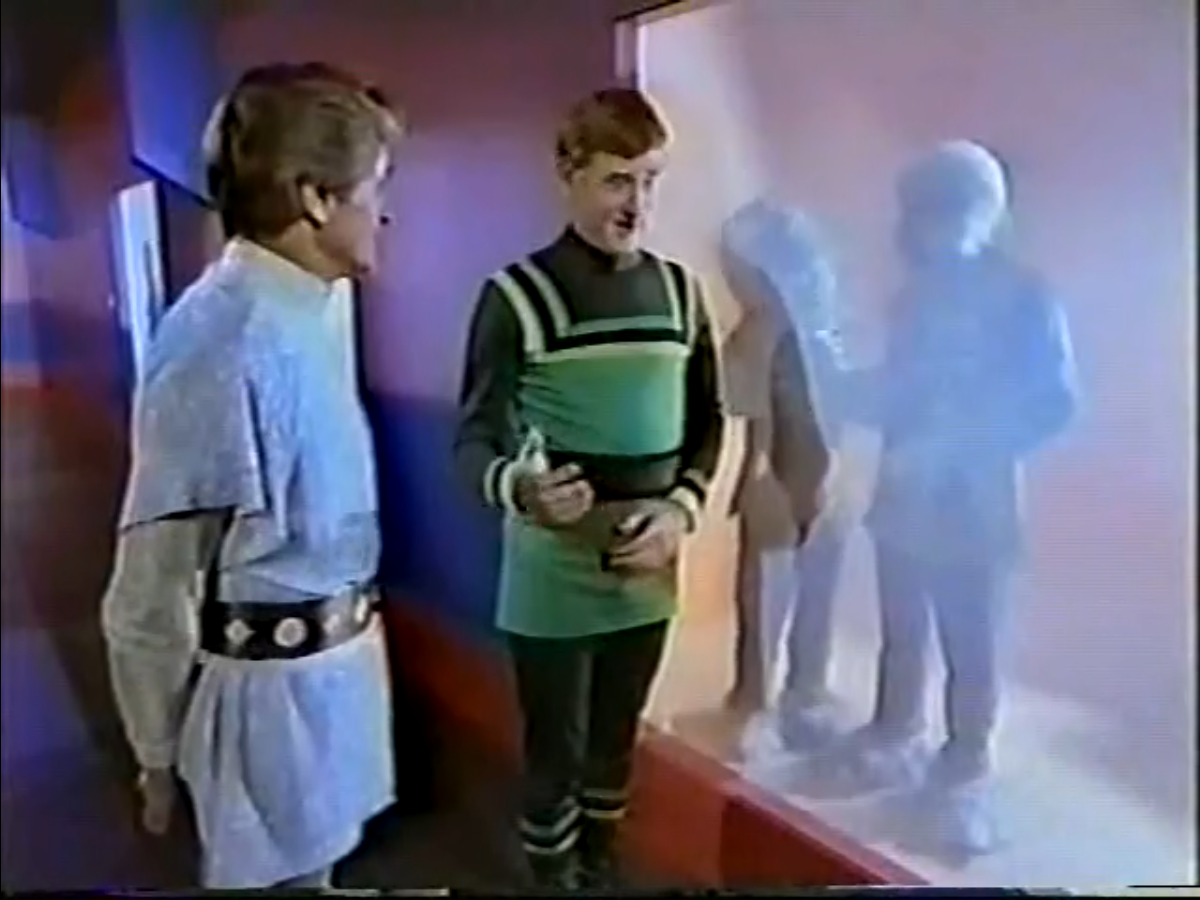 So, there’s been talk recently of a Minority Report TV series, and it looks like it’s moving ahead at full steam. While I’m highly skeptical that the show can succeed (it’s almost like someone forgot to tell the producers this is supposed to be a horrible dystopia), it would hardly be the first film needlessly adapted to fit television. This is a little different from something like Agents of SHIELD, which is still in continuity with an ongoing film series; instead, it’s trying to take a plot that worked for one film and turn it into a long running TV series. In the past, this has occasionally been successful, with Stargate SG-1 as by far the best example. In that case, the show took the loose premise of the film–that there exists a network of stargates, established by ancient aliens, that can be used to travel interstellar distances instantaneously–and ran with it, going places the film would never have dreamed of exploring. It’s such an open premise that the possibilities for stories in this universe are almost endless. And then there are these, films which barely had enough plot for 90-120 minutes that someone tried to stretch out far beyond what it could support. 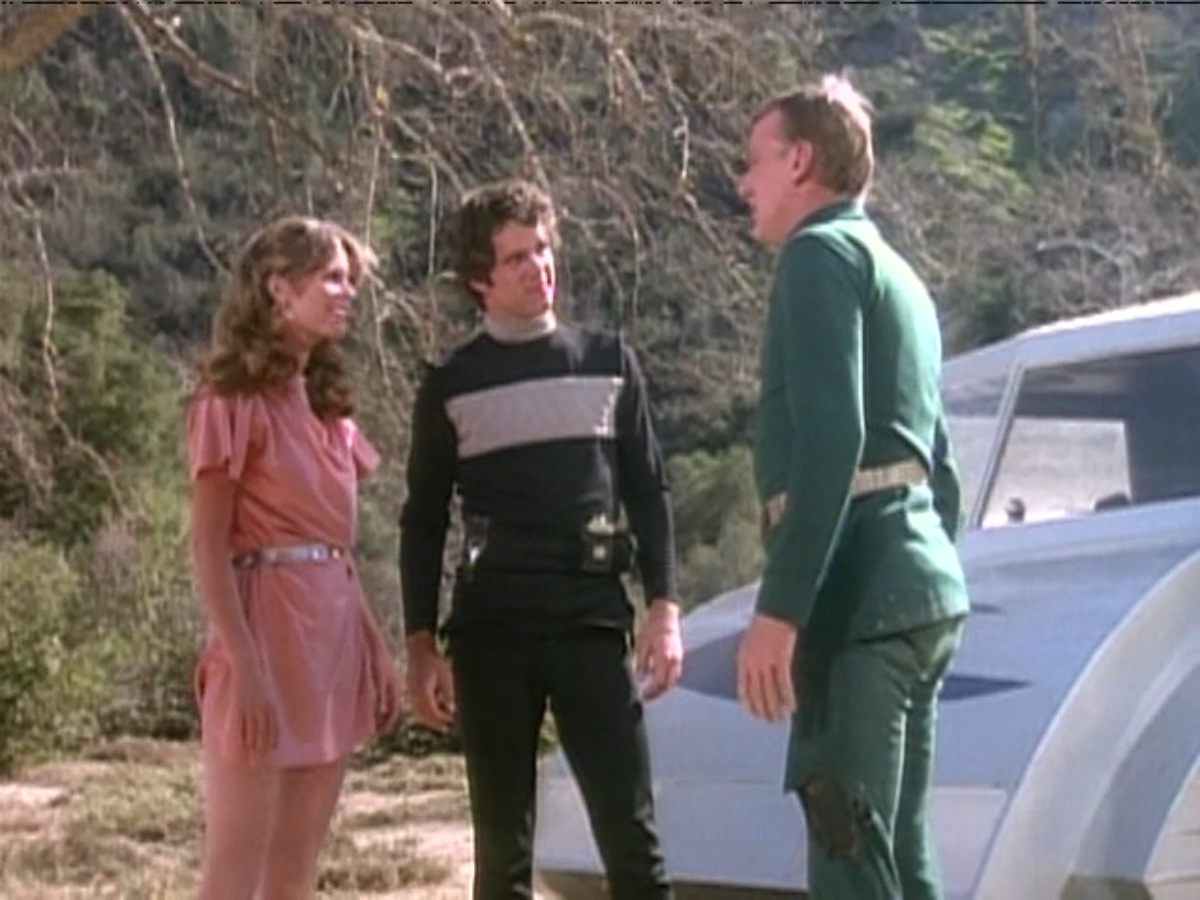 Logan’s Run is one of those movies that seems to have a larger pop culture presence than it deserves. That’s not to say it’s bad, but it’s very much a product of its era and it managed to strike a nerve with the grumblings of teens and tail-end Baby Boomers, who were already feeling the pressure of their elders’ expectations. It’s ironic that the Baby Boomer generation seems to have gone on to become exactly what they hated as young adults, but I digress. Logan’s Run (the film) is all about a world where people are killed upon reaching the age of 30, and no one seems to really have much of a problem with this. Occasionally, there are “Runners,” who try to escape that fate, but people like Logan take on the role of Sandmen to track them down. Logan eventually starts getting doubts of his own, and learns that this whole thing is just a crazy scheme for population control. He, too, goes on the run, until the system can be brought down.

Except, that happens at the end of the film. So, rather than a sequel series (as Minority Report claims to be), they just dragged out the film’s premise, showing Logan and his love interest Jessica wandering a post-apocalyptic wasteland running into every 70’s sci-fi cliche you can think of. The show becomes rather aimless as a result, and starts introducing things like aliens (which aren’t present at all in the original), a secret cabal of old grandpas, and the mandatory early-TV-era grumpy comic relief robot in Rem. The show actually had a lot of former Star Trek writers working on it, so you’d think it would have some promise, but what that actually meant is that a lot of TOS plots ended up recycled for Logan’s Run. The most egregious case is probably the 6th episode, “Half Life”, which has Jessica split into a peaceful side and violent side, just like TOS:”The Enemy Within.”

It’s not awful, but if you don’t have that nostalgia filter on, it can be hard to watch. The show lasted for 14 episodes, only 11 of which ever aired on TV, and has been hard to find ever since. With how fast they fell into stealing old plots, it’s probably for the best. 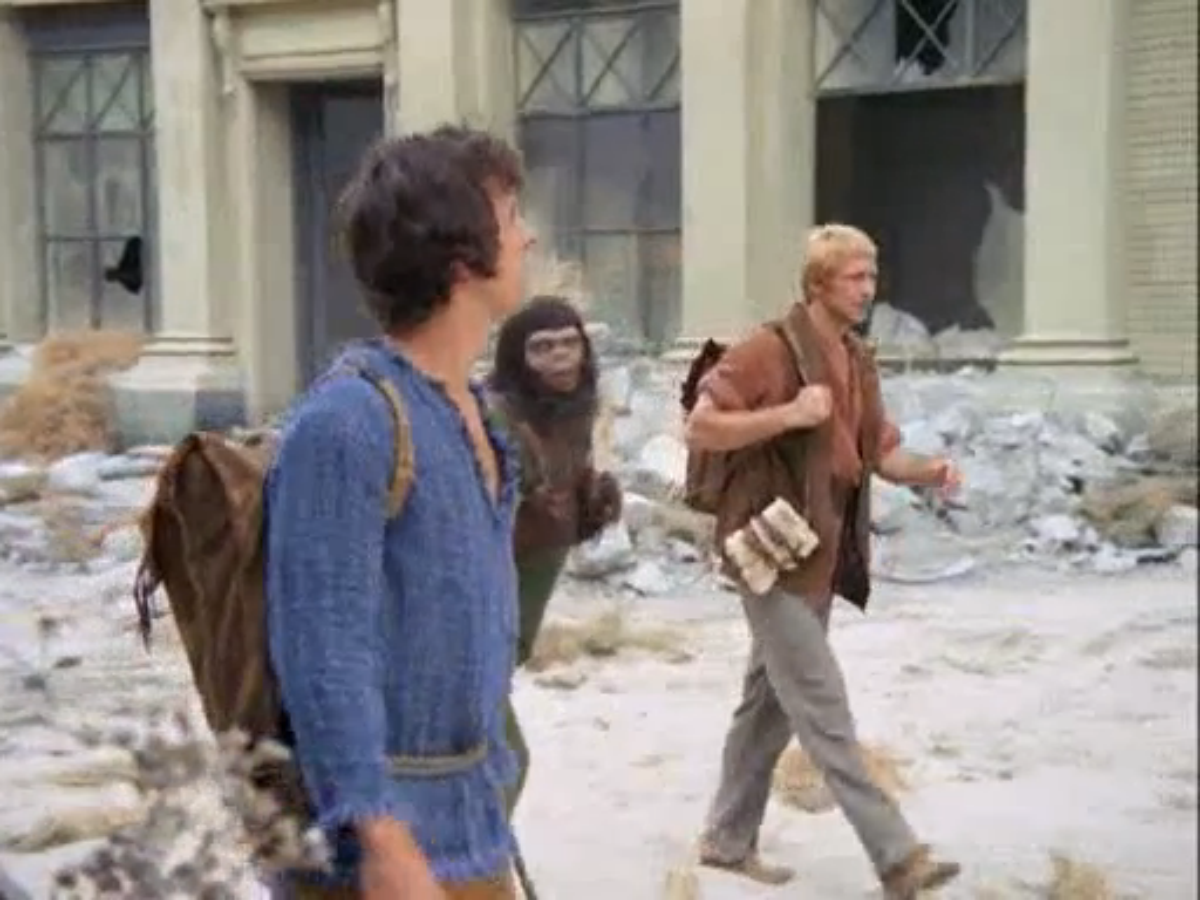 I’m sorry these screencaps are potato quality. The shows are hard to find online.

Planet of the Apes is a classic, influential film. No one will argue that. The modern prequel/remakes have been highly praised, although I’ll admit I haven’t yet watched them. But to me, the core concept of the film is just… not that interesting as a premise for something ongoing. I’ll never understand how four(!) sequels were made for the original, and I’m even more baffled that someone found it suitable for a TV series. Most of the punch in the first film comes from that famous twist ending, which is lost when you try to pick up where it left off. What’s worse, they made a number of changes, like humans still maintaining villages and languages, that remove what little intrigue is left.

The show deals with two more astronauts mysteriously transported by a time warp to the Ape-dominated future, because apparently space around Earth is just fucking littered with interstellar potholes. It takes the same basic format as Logan’s Run: two refugees and a comrade they pick up along the way are being chased down by someone determined to kill them for posing a danger to their post-apocalyptic society. The problem is a format like this (referred to as “Walking the Earth” shows) requires really compelling characters and a fascinating, believable world. Neither show really succeeded in expanding that past what the original films had to offer. This format hasn’t been very common in the modern TV era, because it makes it really hard to have any kind of meaningful, ongoing plotline. Everything they find is left behind, never to be seen again, which is probably why it was so popular before the rise of arc-based television. It’s inherently episodic.

Much like Logan’s Run, it lasted for 14 episodes on CBS, who were apparently the Fox of spawning and killing sci-fi shows before Fox existed. Oddly enough, this show also has the Star Trek connection, in that it was up against Gene Roddenberry‘s post-Trek TV movie/pilot, Genesis II, for a slot on CBS’s schedule. The Apes won, thus freeing Roddenberry up to work on Star Trek: Phase II and eventually Star Trek: The Motion Picture. Fascinating to think how things might have played out differently if not for this one little decision, huh? Personally, I think we all owe Planet of the Apes big time for this one. 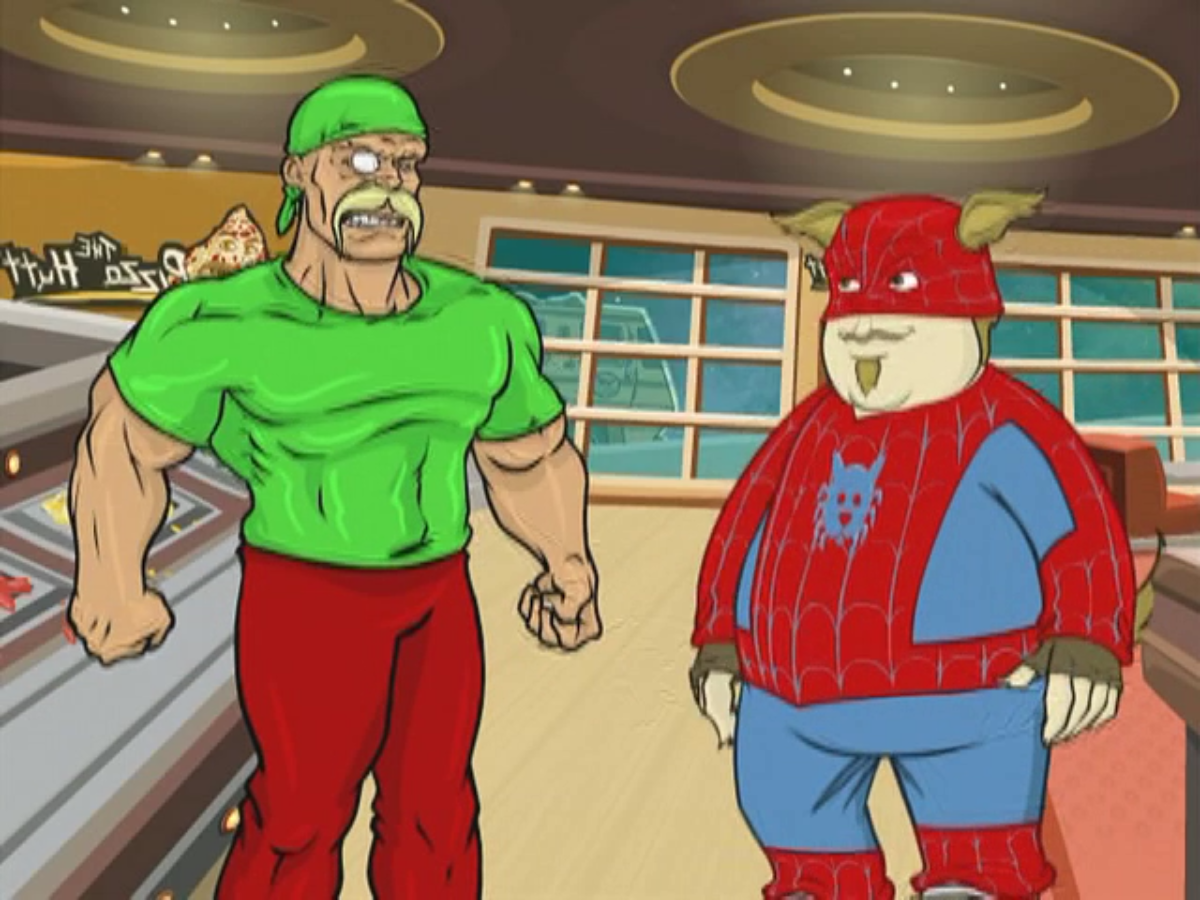 Yep. Animated in Flash, for that extra dose of “Just-didn’t-care.”

Using animated series for a list like this is almost cheating. I don’t think there’s ever been an animated adaptation of a film that was worth giving a second look, and this is largely because animated series tend to be aimed at children and the original movies had a much wider audience. Most of the time, the essence of the film is sacrificed for the sake of making it “kid-friendly.” Remember Robocop‘s animated version?

Spaceballs doesn’t have this problem. The show was ostensibly intended for the typical 18-29 male demographic, and debuted on that mess of a channel, G4. Instead of kiddifying it, the series aims for shallow parody of pop culture topics like Spiderman and Grand Theft Auto, going for cheap and easy jokes that fall flat for anyone with more than a cursory knowledge of the subject matter. While half the original cast, including Mel Brooks and the late Joan Rivers, reprised their characters, most of the edge of the (at the time) 20-year-old original film is gone. This is all without pointing out how the jokes about merchandising and milking a franchise to death in the film seem a lot harsher in hindsight once this show appeared. The fact that it was originally set to premiere in 2007 and was delayed for over a year should have been reason enough to give any excited fans pause. But no, it struggled to air and died an inglorious death (and not fast enough). 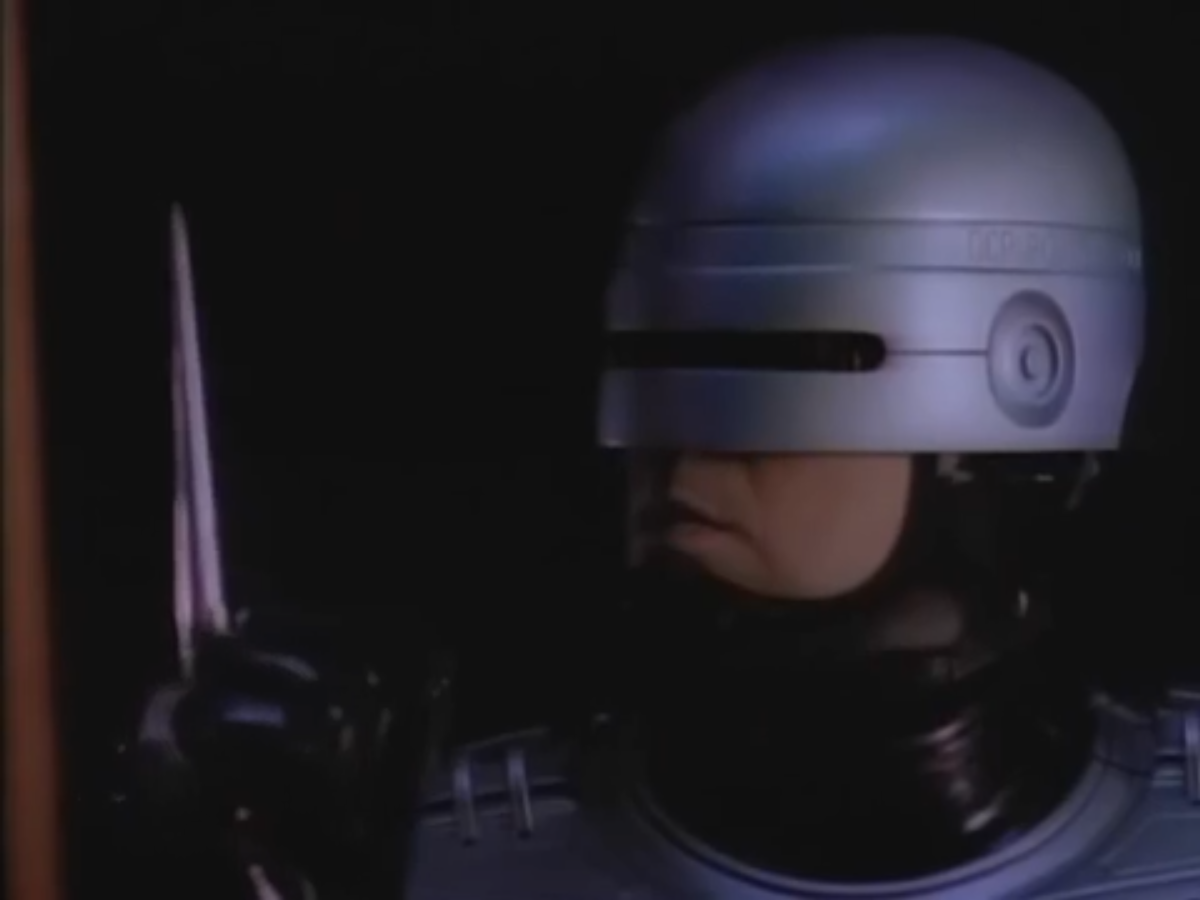 Which brings us to the end of our list–but this isn’t the animated series I was referring to before. When RoboCop first debuted, it was something of a surprise hit, with its dark humor and over-the-top violence helping to bring the dystopian future of Detroit (you can insert your own tired Detroit jokes here, if you’d like) to life as a vehicle for vicious anti-corporate satire. It famously received an X-rating for violence on its first submission to the MPAA, something practically unheard of at the time. The second film tried to take it even farther, with more violence and action and less of that pesky character development. It wasn’t exactly a critical darling, but it made plenty of money. So where to go from there?

Why, to a family-oriented TV series, of course! Set 10 years later, the evil plan hatched by megacorp OCP in the film has apparently been fulfilled, paving over old Detroit and creating the wannabe-utopian Delta City. OCP is less evil and more bumbling now, while RoboCop himself has downgraded his arsenal from deadly weapons to the nonlethal variety. Also, he has a homeless girl and a hologram lady to team up with. And his family’s back–but they must never know who truly lies behind the mask…

As you can guess, the series takes more of a superhero-style approach to the franchise, which really doesn’t jive well with what had already been established. It tends to have goofy sound effects (for EVERY movement he makes) and it’s just all around hard to take seriously in a lot of ways. Plots he has to stop are ridiculous, like a disgruntled ex-employee of OCP bombing the city because they canceled his cure for baldness research. The world isn’t an actual utopia, obviously, but it’s almost incomparably superior to that of the original film. The sort of silly, family-friendly changes are what led to that animated series (Alpha Commando, if you’re wondering) being made and basically solidified a whole era of RoboCop suitable for younger audiences that had started with RoboCop 3. It wasn’t until the reboot earlier this year that the franchise even came close to getting back on track, and that film is still lacking a lot of the satirical elements that made the original great. 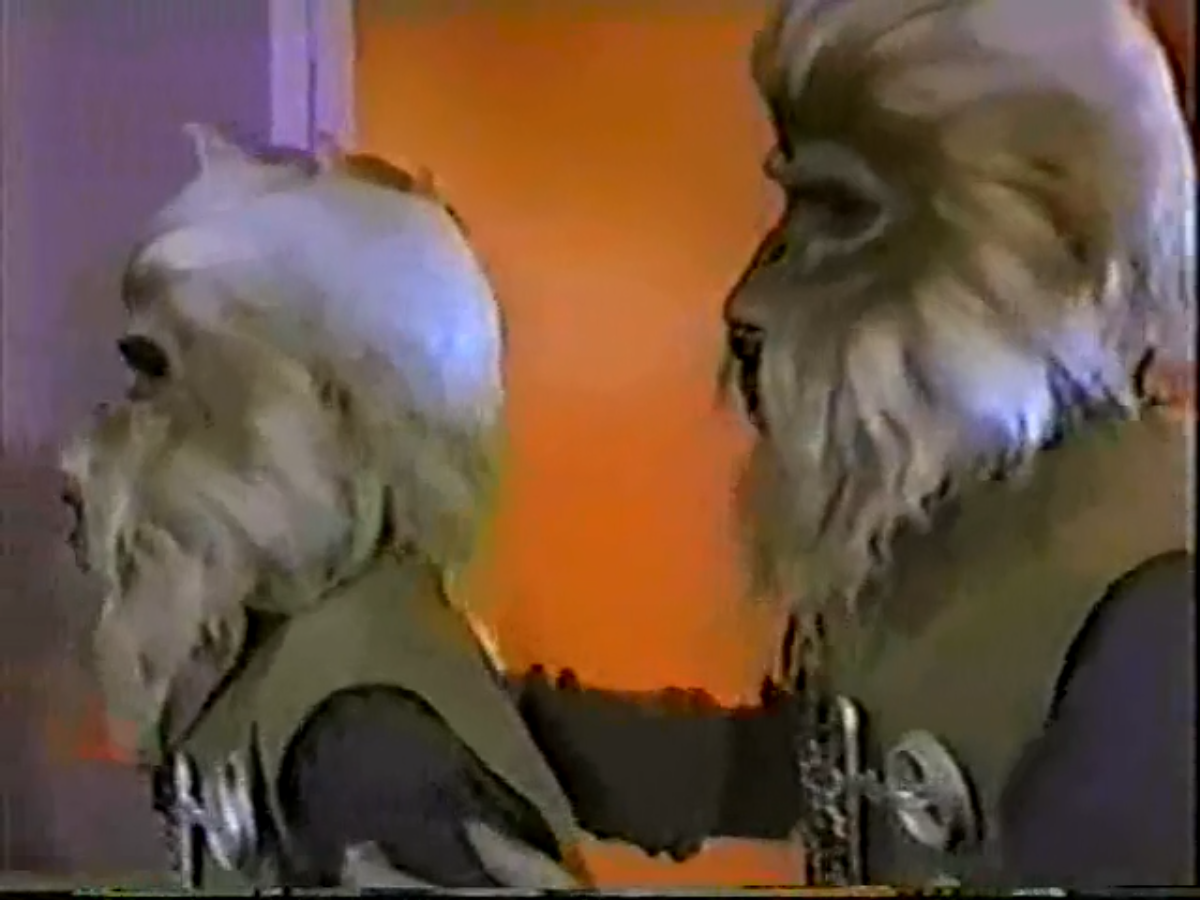 While I was researching this, I’m pretty sure I spotted the Planet of the Apes costumes being recycled as aliens in episode 2 of Logan’s Run. I tried to verify this but it’s proven quite difficult; costume/prop recycling is pretty thoroughly cataloged for Star Trek (which also reused parts of Planet of the Apes costumes) but none of these shows have a passionate enough fanbase to check on this sort of thing. Judge for yourself, with this image and the very first image of the article.

Also, I discovered, to my horror, that there’s a Star Trek/Planet of the Apes crossover comic coming out. Who was clamoring to buy this will be a mystery for the ages, but… that exists.