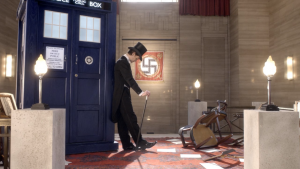 Are you planning on building a time machine? Or maybe you’re just trying to figure out what to do with the one you’ve already got? Well, you’ve come to the right place, my friend. I have here four of the big mistakes that new time travelers make early in their careers. If you don’t want to return home to a future of Nazi Zombies from Space, or even just get back, excited to share your invention, only to find that no one remembers who you are, then you better read over these sci-fi missteps first.

And for the love of all that exists, DON’T EVEN GO NEAR HITLER! 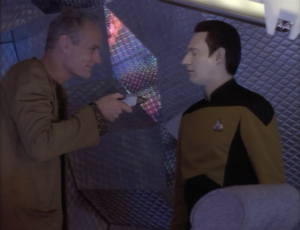 And if you do steal things, don’t steal the android!

Of course, many lazy entrepreneurs will try to make a quick buck out of their newly found machine, but you’d have to be a real idiot to try marketing a time machine. Instead, you might think the smarter option is to do a little “inventing” of your own. It’s easy: just go to the future and pick up some cool new tech. Maybe a robot or a food replicator or something. Then, all you gotta do is bring it back to the present, reverse-engineer it, and invent it publicly yourself! After all, it was going to exist anyway. What difference does it make if you invent the iPod instead of Steve Jobs?

First of all, those future people might not be too happy about you stealing their stuff. Just ask Berlinghoff Rasmussen–oh wait, you can’t. He tried to steal stuff from the Enterprise-D and ended up stuck in a Federation prison colony. I mean, it worked out a little better for Henry Starling, at least initially, but then Captain Janeway blew him to smithereens with a photon torpedo. And forget about the consequences to you personally: have you thought about the possible repercussions on the future of you inventing this stuff early? What if all you end up doing is let Skynet get created a few years early?

If you really have to use your wonderful time machine for personal profit, at least try out the old compound interest ploy. That worked out okay for Fry. 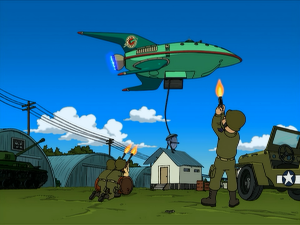 “Suck on that, Causality!”

On the other hand, you know what didn’t work out very well for Fry? Running into his ancestors. Now, you might think that it would be cool to have a chat with your great-great-great-grandfather. You know, fill in a few gaps in the old family tree, or get to know the family’s legendary patriarch. But it seems like whenever a time traveler gets near their immediate family, something happens that puts them on the path to non-existence rather quick.

Poor old Fry got lucky, since he was able to become his own grandpa, but do you really want to risk that? And I mean, best case scenario, it works out like it did for Fry, and you still have to sleep with your own grandmother. That’s not cool. If you’re not so lucky, you could be like Marty McFly, and just start fading out of existence because you did something as simple as put a little hiccup into your parents’ relationship. Next thing you know you gotta play Cupid to your mom and dad, and is anyone really comfortable doing that? No, didn’t think so. This just gets more complicated and dangerous the further you go back in time. You fuck up and kill Y-Chromosomal Adam and now the entire human race has changed. Great job!

And let’s be real here: even changing the time your parents conceived you by a few seconds would likely result in you not being born. Best not to hang around family at all. 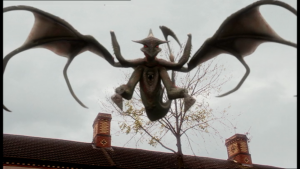 You rip one tiny hole in time and space…

Of course sometimes the problems are a little less personal. As far as we know, you’re the first time traveler, right? (If that distinction even means anything.) So we have no idea what will happen when you do it. Maybe you think it’s just going to splinter off into an alternate timeline or something, so you’re not worried about damaging the future. It might be all fun and games, mowing down Hitler and cockblocking your dad… but then The Reapers emerge. Cause as it turns out, the universe doesn’t like it too much when people start screwing around with causality. It has ways of making sure that time flows uninterrupted, and they aren’t pleasant. You wanna get devoured by monsters until you never have been going to exist? And look at all those grammatical problems you’ve introduced. If the Reapers don’t get you, the grammar Nazis will.

But then, perhaps your universe doesn’t have any Reapers or anything like that. That doesn’t mean you’re home free, though; someone might take it upon themselves to police the timeline instead. Like 29th Century Starfleet, as seen with Captain Braxton, or the Time Agency that Jack Harkness belonged to. You might say that the Time Police don’t really have any more of a right to interfere with the timeline than you do, or that they have no way of knowing that their future is the one that should be protected, but they don’t call them Time Police for nothing. They aren’t just above the law, they ARE the law. You’ll have just as much luck trying to reason with them as you would a traffic cop today. No one wants to travel through time just to get caught up in a futuristic bureaucracy.

So if you still want to travel through time, keep your hijinks small-scale, and maybe the universe won’t mind too much. Try leaving a whoopee cushion in Napoleon’s war room instead of setting his alarm clock late on the morning of Waterloo.

No Archer, no Federation. No Federation, no time machine to take Archer back. Oops!

Maybe you got lucky, though, and there aren’t any reapers or Time Police running around to stop you. And you kept your distance from your family and resisted the urge to pillage future technology to sell in the present. Great! …Isn’t it?

No. Of course not. You know that. Bad Futures are a dime a dozen. A sick McCoy goes back in time and the Nazis win World War 2, even though he never came close to the war. The crew of Moya found themselves back in time at the site of a battle in the past and managed to turn a peaceful resolution into a bloody massacre through their sheer presence. The Doctor has to prove to Sarah Jane that just because she still exists doesn’t mean her future will if they screw up the past and do nothing. You can screw it up going the other way too, like when the Enterprise-C gets dragged forward, resulting in a future where the Federation is losing a war with the Klingons instead of being their allies. Or the untimely disappearance into the future of Colonel Sheppard. If you’re an important person like Captain Archer, just leaving your native timeframe is enough to cause the future to go bad. If not then you’ve just traveled to the future and found out you weren’t really that important, which would also suck.

How do you avoid the bad future? Good question. Start by blowing your time machine up and ripping the plans to shreds. Maybe, if you’re really lucky, that’ll do it. Probably not though, cause you’ve already gone and opened that can of worms. Congrats!

Well, what’d you think of this article? Little different than usual. Would you like to see more like this in the future (or maybe you already have with that time machine)? Do you have some other horrible unintended consequences of common time travel plots that you feel should belong on the list? Let me know in the comments, or on Twitter @RetroPhaseShift.