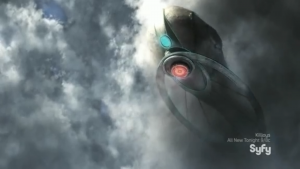 This week is a marked improvement over last. We get some backstory on Nolan, finally, but it comes across as more of an excuse than an explanation. On the other hand, things are looking up for Alak, and that’s who we actually care about, right? New opening credits are just made of sad, though…

The core of this episode is the old sci-fi conceit of the telepathic leash. Irisa and Nolan are linked from being in the pod together, and so they’re sharing memories and they can’t get very far apart from one another without causing problems. The other most notable case of this in sci-fi is a one-off episode on Star Trek TNG, “Attached,” where Picard and Dr. Crusher are linked. That was used as a way to resolve their romantic tension, to some extent, and it was a pretty great episode if you ask me. This episode is almost the inversion, in that it’s used to drive a wedge between Nolan and Irisa–as if they needed more reason to drift apart. It’s another aspect of that whole consequences thing, in that it’s building off of the season 2 finale instead of just letting that go. As they go back through what are mostly Nolan’s memories, there’s a lot to be revealed. 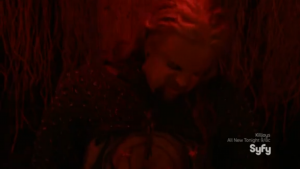 Yeah this isn’t something that’d be considered a war crime or anything.

The episode starts off circa 2013, where a young Nolan has been beat up by a bully. He declares here that he’d rather accept getting punched once than try to defend himself and get hit a second time for resisting. The other big flashback shows Nolan and his sister fighting during the Pale Wars, when an Irathient soldier pretends to surrender to get the drop on them and is able to kill her as a result. These two incidents are clearly designed to justify Nolan’s overly violent behavior, but it doesn’t really work. Instead, it comes across more as what TVTropes would call a Freudian Excuse. Because this one time Nolan didn’t shoot first, he’s been all “shoot first, ask questions never” since then. The thing is, this doesn’t jibe with existing aspects of his character. Nolan is hailed in the pilot as one of the “Defiant Few,” one of a group of both Votans and Humans who threw down their arms and joined forces to defend innocent civilians at the Battle of Defiance, an event that’s cited as an inspiration, a shining example of hope that human and Votan alike can coexist. That’s why the town where humans and Votans live side by side is named Defiance. Does that sound like the kind of man who’s sitting in a bar, celebrating Arkfall (which I thought was a bad thing for everyone?) and chanting that “Earth is for humans!” all while throwing darts at a still-living and suffering alien’s body? Hell, it doesn’t even make much sense in episode, since he’s already dragging a young Irisa around at this point. Complexity of character, or sloppy writing? You can probably figure out which side I come down on by looking at the reviews for last week and season 2’s episode 7. The writing is extremely uneven, and looking at the IMDB page gives you a clue why. Just look at how many writers have worked on this show that only has 31 episodes. When you have a new person writing each episode, it’s no wonder things get inconsistent.

So while these flashbacks didn’t do much to get sympathy for Nolan, they were actually pretty great for Irisa’s character. It’s like she was finally able to see Nolan for who he is and what he’s done to her from a clear perspective. Sure, they’ve butted heads in the past–quite a lot, actually–but that’s typically couched in normal teenage rebellion and feelings of being out of place and unable to fit in. He says he does things, very difficult things, for her own good, but honestly, what did he expect to be the result of forcing a child to kill? OF COURSE it’s going to cause trauma. And after everything she went through while being manipulated by Arkbrain-Irzu, it’s no surprise that she’s at the end of her rope now. So there’s actually some character growth here for once, culminating from all of this going back to last season, and Irisa says it’s time for her to leave–so naturally we have a stupid plot contrivance to explain why she can’t. Sigh. 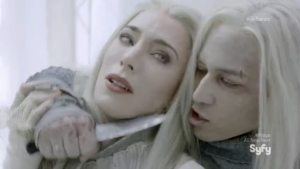 Alak’s finally had it, and that means no one is safe.

The episode’s almost as big for Alak, though, as he gets tired of waiting for mama and papa Tarr to come save him and breaks out on his own, actually stabbing and killing his Irathient guard and fighting off Rahm Tak well enough that he’s able to escape in a “roller.” Gotta say I was really hoping he’d just kill Rahm Tak and get it over with, but we all know it’s too early in the season for that. Still, this is a pretty huge leap from the boy who was throwing up after being made to kill Skevur early on last season. And when he makes it back to Defiance, his number one concern isn’t a happy greeting for Stahma: he’s holding a knife to her neck at the end of the episode, demanding to know why she killed Christie. MUCH stronger ending than those god damn musical montages the show insists on using when it doesn’t know how to wrap things up. I’d never have guessed back in season 1 that bratty Alak would be one of the best characters on the show now. 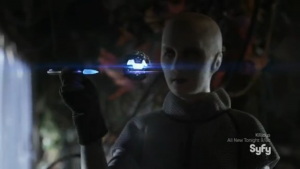 This was kinda neat, even if it was ridiculous.

Beyond that, we had the high points courtesy of Doc Yewll and a little spotlight on Andina, who’s showing us what the Votans of Defiance might find appealing about the VC message. She seems a little young for that, though; most Votans who are Alak’s age or younger seem to be way more cool with humans than she is here, so eh. As of this episode, our “What’s next in Season 3” post is pretty damn accurate: so far we’ve seen more of Andina, a flashback to the Pale Wars, Berlin leaving the E-Rep, more Amanda/Berlin action, and VC/E-Rep tensions escalating to the point of war. So I guess now we’re waiting on Kenya to come back, some more spotlight for Doc, and whatever the deal with that trans character is.

All in all it’s a decently good episode for Defiance, especially compared to last week’s nonsense. Next week, come back for “Where the Apples Fell.” See you then. Oh, and do check out Dark Matter and Killjoys! They’re both already better than Defiance, so… yeah. They deserve viewers.