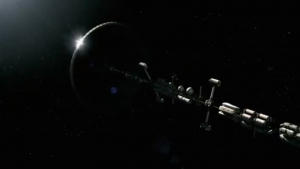 Yet another show coming to us by special request, Defying Gravity was basically doomed from day 1 due to network mismanagement and a (frankly baffling) mix of genres that failed to find an audience. However, the show’s creator, James Parriott, had plotted out several seasons worth of material that would’ve been covered in subsequent seasons, and as is so often the case, what was coming was far more interesting than what we saw. The answers to Beta, Gamma, and the fates of these horrifically incompetent and immature characters were left hanging when the show was canceled. Here’s what I’ve found for Defying Gravity season 2 and beyond.

The basic outline for the show going forward would’ve remained the way it is as we saw it–a half to full season dedicated to reaching each planet and setting up the particular character and conflict that would have to be overcome. Season 1 saw Venus as the primary focus, with heavy emphasis on Zoe’s trials until it came to a head on the surface. So season 2, for example, would’ve focused more on Nadia along the way to Mercury. Mars, having already been established somewhat, would’ve gotten more focus than any of the other planets, with possibly up to 2 whole seasons centered around there. But more on that later. I’ll go through the plans on a roughly season-by-season basis, trying to put the pieces into position.

That’s about it. It’s quite a lot of info, actually, and almost all of it came from two interviews conducted a year apart by Keith McDuffee on a now-closed site called Cliqueclack, so all thanks to him for doing the hard part; I just tried to reorganize the info into a clearer format. Suffice it to say, I wasn’t particularly thrilled with the path this was going down, and the melodrama that I disliked about it wasn’t going anywhere. As a result, I don’t feel like Defying Gravity getting canceled was particularly tragic. It was a strange show that never stood a chance of succeeding, and so it’s no surprise that it didn’t. But if you liked it, I hope this gives the show a little closure for you.

Do you wish Defying Gravity had been renewed to continue down this path? Or is the prospect of a universal retcon enough to make you want to end it as it did? If there are any other shows you’d like me to research, leave a message in the comments, or send a tweet to @RetroPhaseShift. If you enjoy these and want to know when the next one’s out, you can also subscribe to the “What Could Have Been” RSS Feed here.