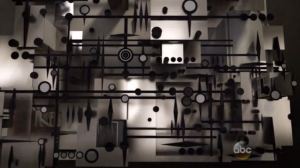 With Ward having escaped in the last episode, the team has their hands full. Also, Coulson’s reaching Garrett levels of alien-crazy and we really gotta do something about that. But he’s not the only one having visions of alien writing, and the others are somehow handling it even worse.

Coulson starts off the episode with his carving alien writing in the wall again, except we soon learn that he’s been doing it more often, to the point where it’s happening every day and every night until he can no longer sleep. Which really just means that if they don’t figure out how to stop it soon, he’s doing to die from not sleeping, which is one of the top ten least interesting ways for a SHIELD agent to die. But then Coulson did get one really cool death already, so maybe he should just be glad for that. Not everyone gets stabbed by a Norse god, you know.

Ward, meanwhile, is trying to get outside the country, but since he broke out after he was transferred to FBI custody, the government’s keeping it hush-hush at his brother’s request. So it’s all up to SHIELD to find him–and find him they do, along with all the C4 he wired himself with. Guess they’ll just have to follow him until he’s in a less crowded place.

It’s an interesting evolution from flat, to painting perspective.

After receiving the report, Coulson and Skye learn of a murder in upstate New York where the alien writing has appeared, and it turns out the victim is a former SHIELD agent who’s been painting the alien writing. So that’s two new mystery people doing it, the murderer and victim. Looking over the various pieces of alien writing so far, Coulson gets the feeling that these other people have pieces he’s missing. Fitz and Mack manage to acquire the body for an autopsy, which Simmons will perform, although she’s absolutely frigid towards the former. It turns out that the victim also, incidentally, is recorded as dying of cancer 5 years ago, rather than leaving SHIELD. A little lingering resentment? Coulson is frustrated because he feels like he should know what’s going on, and yet it’s outside his memory right now. You’d think he could go check Fury’s magic box of knowledge.

Ward gets to a bus depot and immediately goes up to “help a lady with her bags,” by which he really means “use her as an unknowing hostage in case SHIELD comes for him.” But Agent Morse is there waiting for him, and lucky for her she’s new, so he doesn’t know what she looks like, unlike Trip. But he manages to catch on anyway by noticing that she hasn’t read a single page of her book in the entire time it took to board the bus. He threatens her and changes buses–to a bus that Lance Hunter is on, who he also doesn’t know (and who has decided to put on a fake Texas accent because fuck it, if he’s going undercover he’s going to have some fun, damn it!). 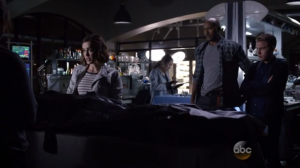 Simmons has completed the autopsy, where she found the death to be highly ritualistic, and also that the victim put up a fight, getting some DNA under her fingernails CSI-style. But since this is SHIELD, crazy technology is a lot more acceptable and so learning that both the victim and murderer (the guy from episode 6’s tag) had GH325, the Tahiti Serum from season 1, in their blood stream is par for the course. Presumably, then, she was a test case for the drug, and when it became clear that remembering the procedure would drive her mad, her memory was wiped like Coulson’s was, but more thoroughly, giving her a new identity and freedom from SHIELD.

Speaking of memory wipes, it turns out that SHIELD recovered Raina’s little chair that she used to make Coulson remember the first time around, and he’s determined to use it again, this time trying to remember his time as the leader of the TAHITI project, as he learned last year by watching a video of himself reporting on the progress. Simmons and Skye are against it, but he believes it’s the only way. Using the machine, he’s able to remember meeting with half a dozen test subjects in the Guest House, where they found the alien last season. But they all soon degrade and start writing the alien symbols even before leaving the base. Coulson protests, saying they should destroy the alien–but a woman tells him it’s thousands of years old, “older than the pyramids.” So I guess we can safely say it’s the same one as from episode 1 this season. The woman argues that they’re going crazy due to “genetic memory” from the alien, so if they just completely wipe their whole minds, it might solve the problem. So they try it and Coulson realizes immediately this is an awful idea. In the present, he’s clearly suffering and may not be capable of handling the machine much longer, but Skye follows his orders and leaves him in until he recall the new names that these test subjects were released under, since one must be the murderer. 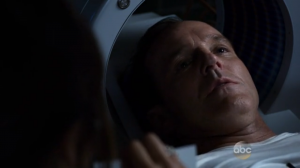 Well, at least he’s… volunteering? Is that better?

Ward has arrived in Boston and immediately heads to a bar while Hunter watches from outside. Ward apparently knows the bartender, who’s happy to see him for some reason. Then a car pulls up and Bakshi gets out. The fabled bad-guy bar, perhaps? As he and Ward chat, Ward name drops Baron Von Strucker, an upcoming villain in Avengers 2. Getting in on the shared universe act early this season! Ward wants a meeting with Whitehall, and offers Coulson as a way of getting it. Hunter reported on Bakshi’s appearance, but since no one can get in touch with Coulson and the team back at base, it’s going to be up to May, Morse, Trip, and Hunter. With the field team still watching the HYDRA bar and getting ready to attack, they’re worried that he’ll take the whole bar out. But when they bust in, all the HYDRA guys who came with Bakshi are dead, and Bakshi himself is tied up in the back room with duct tape across his mouth that reads “For Coulson.” Ward redemption arc confirmed?

When they unhook Coulson from the machine, he starts going crazy and Skye finally calls May for help. May says to lock him up until she returns, and he appears to go along with it at first… but then he throws Skye into Ward’s old cell instead and leaves to take care of either the last subject or the murderer (a former SHIELD assassin) himself; it’s not immediately clear which. 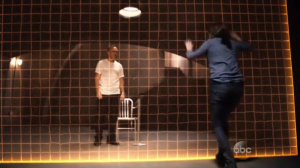 Gotta do the thing where it lights up when you turn it on and when you touch it. How else would you know it’s a forcefield?

Mack and Fitz talk about Coulson, Mack quite disturbed by what he’s seen, being the new guy, and Fitz dismissive of his concerns, saying that “brains don’t delete files, just lose connections”–hinting at a possible solution for himself as well. Simmons comes around looking for Skye, and they finally realize she’s locked up downstairs and get her. She says Coulson’s after the last subject, and that they must stop him. Coulson knocks on the door and points a gun at the guy, so… yeah kinda looks bad, doesn’t it? The last subject says he doesn’t know what they’re talking about, hasn’t drawn anything, so leave him alone.

Except the murderer got there first, and he’s picked up on the fact that Coulson is now “one of them.” With the last subject tied up and Coulson ready for torture, the murderer reveals that he remembered through pain, and was inflicting pain on the other subjects to try to help them remember, in the hopes that they might have the answers. After slicing Coulson a few times, the last subject is able to break through the ropes tying him, and Coulson sees that the train set the subject guy had been working on resembles the alien writing–not writing, but 3D. The last subject frees Coulson and his family and runs, leaving Coulson and the murderer to fight. Skye and Mack arrive, with Mack pointing a real gun at Coulson, who’s lured the murderer up to the top level and is choking him out. As Mack counts to 3, the murderer has an epiphany and becomes harmless. Why? He’s seen the train set in 3D, too. A map, like Skye suggested, but a 3D one. The Blueprints of a city. 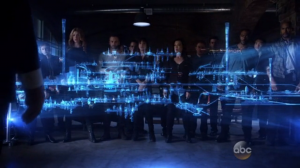 The alien city, in all its blue-tinted hologram glory.

Coulson finally explains everything to the whole team, showing them the holographic image of the city, constructed out of all the pieces collected from himself, Garrett, and the subjects. He’s fine now, and the season and a half long mystery surrounding Coulson’s revival is solved at last, but with a new one to take its place. If only for this reason, it’s a must-see episode, but it’s great even without that. SHIELD has hit its stride, and we have a fabulous show on our hands for sure.

The episode’s tag has Ward shaving off the beard and calling Skye on Bakshi’s phone while she examines it. He has a new mission now: to take out his brother.

Next week: The Things We Bury.