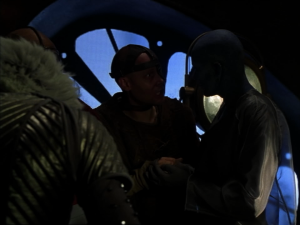 On here, one of my most popular topics is “What Could Have Been,” where I go over the now-public plans for seasons and shows that never developed. But what about those times when these major losses were narrowly averted? Once in a while, things align just right, and looking back, it’s hard to imagine how the show could have continued without this one aspect. And yet, there were many moments of serendipity that ended up playing a huge part in these shows’ success. So today, we honor just a few of those close calls by looking at “What Almost Wasn’t,” with 4 near misses from the annals of Sci-fi history, focusing today on casting and characters.

In Chiana’s case, “near miss” is rather literal.

The producers of Farscape were probably some of the most flexible writers around. When they saw how well Scorpius worked, they brought him on board as the new big bad guy. When they realized they couldn’t have him and Crichton interacting as much as they’d like, they gave Crichton an imaginary Scorpius friend. But Scorpius wasn’t the only character promoted from a one-off appearance to eventually become a main character. Early in season 1, when they first encounter Chiana and the Nebari… she was supposed to die. She was never intended to survive past that episode. And yet, they were so impressed with her, and particularly, once again, her interactions with Crichton, that they changed the scene where Durka shoots at her so that she survived. This is why she doesn’t have a whole lot to do in the next few episodes; she wasn’t supposed to be there. But given how important she eventually becomes, her relationships with Crichton and D’Argo and Rygel, it’s hard to imagine the show without her. This also happened with several other characters, like Stark (who actually did die), which just goes to show that sometimes not having everything rigidly planned out is actually a good thing. You know, unless you explicitly tell your audience that it is planned out.

3. Doctor Who – Donna and Penny 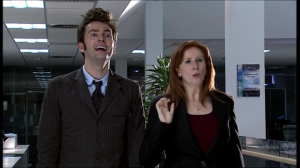 Their dynamic is so great. It’d have been a shame for her to be one-off.

In prepping for Series 4 of the new Doctor Who, Russell T. Davies, then-showrunner, had to figure out who the new companion would be. We’d had Rose, and her tragically-ended romance with the Doctor, and then Martha, who pined for him while he ignored her feelings. So what do you follow that up with? Why, another romantically interested female, of course! Yes, the original plans for Series 4 propose a companion named Penny Carter, who RTD describes in his book “The Writer’s Tale” as a 30-something journalist out of Northern England, who was to join up with the Doctor after learning that her boyfriend was cheating on her in the first episode of the season. If the name seems familiar, it’s because RTD eventually recycled it for a minor character in “Partners in Crime,” the actual first episode of series 4. There are also mentions of her family, who sound suspiciously like Donna’s (and funny enough, Wilf was also something of a surprise, as the actor originally cast as Donna’s father died, and so they ended up bringing Wilf back and retconning him into being her grandfather). Eventually, Catherine Tate was approached to return as Donna, to which she agreed, and Penny disappeared into obscurity. This ended up being a great thing for the show, as the complete and utter lack of romance between the Doctor and Donna was a welcome relief to many fans, and the growing role the Wilf took eventually led to his wonderful part in “The End of Time.” Can you picture that story with anyone else? 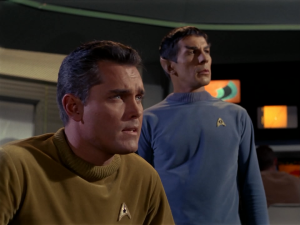 Pike’s footage was recycled in “The Menagerie,” which helped cement Spock’s loyalty to his captain even above his duty.

Before JJ Abram’s reboot, Captain Pike was one of those characters who was only known to the most hardcore of Trekkies. In the Original Series, we do see him, briefly, as the incapacitated former captain of the Enterprise. Reusing the character for the reboot was actually, in my opinion, a stroke of genius, as he’s a relatively unexplored part of the Star Trek continuity. But originally, he was supposed to be THE captain for the entire series. Jeffrey Hunter, the original Pike, played a very different captain from Shatner’s Kirk. Pike was a man who’d already been in command for years, and was growing weary of the responsibilities it entailed (much as Kirk eventually did with his Admiral duties in the films).  He doesn’t have as much of the Kirk swagger, nor did he appear to be quite as much of a lady’s man (although there’s every indication he might eventually have been). Pike’s version of Trek would definitely have been a slower, more cerebral and less adventurous show. And while he served with Spock, the entire rest of the crew is completely different, too.

Jeffrey Hunter used a technical loophole to get out of his obligations when a second pilot was requested, itself an almost unheard of second chance. Star Trek has had so many of these over the years that it’d be easy to fill up a dozen lists with them. And so Shatner was brought on, and the Kirk/Spock/McCoy triumvirate was born, setting the character dynamic of sci-fi shows for years to come. Jeffrey Hunter actually ended up passing away in 1969, so had the show lasted that long with him in the lead role, it would have made revival movies or series nearly impossible. 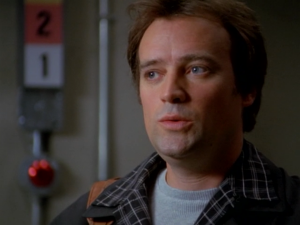 Much like Star Trek, Stargate Atlantis was a show that built itself around a core character dynamic that made up the heart of the show–namely, the relationship between Sheppard and McKay. Fans of SG-1 were no doubt surprised to see McKay in their first glimpses of Atlantis, as his character had only appeared a handful of times and he was never portrayed very positively, especially given that his original role was to act as a foil to Carter. So why would the show’s creators choose to bring back this minor, less-than-likeable character for a leading spot in their spinoff?

Well, originally they didn’t. They knew they needed a doctor character on Atlantis, and they came up with Benjamin Ingram, a rather dull, even-tempered Canadian scientist. Ingram proved incredibly difficult to cast, and while things on set just weren’t working, Brad Wright and pilot director Martin Wood suggested they call David Hewlett and see if he would be willing to reprise his role as McKay. He came out, they shot it, loved him, and the beginnings of a wonderful on-screen friendship were born. With how much of the show ended up centered on McKay and his abilities and ego, it really seems like they lucked out getting him at the last minute.

What do you think of these changes? Might some of these shows have been better as they were originally planned, or were these really for the best? Let me know, either here in the comments or on twitter, and if you enjoy this article then I’m sure that more of them will lie ahead.