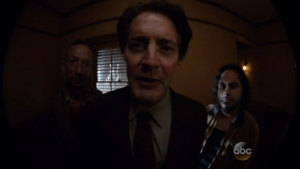 Skye’s crazy dad puts together a supervillain team who are a little lacking in the “super” department, and my theory from last week was confirmed (well, halfway, anyway). On to the review!

So, the previews for this episode had it looking like this was going to be the big showdown between this team that Cal (Skye’s dad) had wrangled together. It didn’t really deliver on that very well, and I was hoping for a little more buildup to this. It seems like all of Cal’s new friends have been taken in after this, so I don’t expect to see much more of them (although I suppose it’s possible). So in that regard, this episode was a bit of a letdown.

Garner makes for an excellent counterpoint to May.

But if you’re watching SHIELD for superpowered brawls, you’ve made a terrible mistake. That’s what the movies are for, after all. Instead, SHIELD is about the characters and exploring this world that the MCU has constructed, and that part of the episode is fantastic. The main focus is Skye trying to control her powers, and May’s ex-husband is brought in as a psychological expert with Gifted humans (or Inhumans, as the case may be). Blair Underwood, who played Andrew Garner, does a great job and I’m glad to hear that he’ll be back for a few more episodes. I was also pleased with this casting beyond that, as interracial couples are pretty underrepresented on TV in general, and especially ones where neither member is white. So props for that, SHIELD producers. By making Skye’s psych evaluator someone who May was involved with, we were finally given a glimpse underneath that icy exterior for once, and it works magnificently. Fitz and Simmons pretty much represent the whole fanbase’s feelings here, as they gossip about her looking happy and excited for once. It definitely left some tantalizing clues and even more questions about what May was like in the past and reminded us of “the Cavalry” nickname.

Another interesting point was Skye’s suppression of her powers causing her actual, physical harm. It’s especially relevant in that she was suppressing her powers by suppressing her emotions, which is already something we all know is unhealthy. Like someone who deals with their emotions in an unhealthy way (May, for example?), Skye is going to need profession help. This seems to be another aspect of that “powers-as-disabilities” theme I mentioned in previous reviews, which I still maintain is a really unconventional approach to all this. 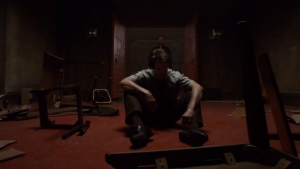 Based on the destruction, he’s had an episode of some kind. But no Hulk clothes ripping.

But let’s get back to that supervillain team, since it makes up a good chunk of the episode. About half the team is drawn from the comics, although they’ve had some huge changes: Karla was originally a Daredevil character, and in a similarly abusive relationship. But she never had any powers and wasn’t the one responsible for killing her partner. And let’s be real here, her “powers” were a little silly and SHIELD’s solution to the problem was even sillier. They couldn’t have been removed or dealt with another way? They had to be covered in those unwieldy gloves? Then there was Angar (the Screamer, as he’s known in 616), who also has a Daredevil tie, and his comic book explanation is  that he’s described as “made of pure sound.” His comic powers created hallucinations, so he’s actually more dangerous on the show than in the comics, even if that comes with the downside of, you know, a physical form. And then of course there’s Cal, who was finally confirmed to actually have some level of superpower. Mr. Hyde, his comic book villain alias, transforms into a monstrous form, but it’s not clear whether Cal is capable of that (yet?). He certainly had some kind of Hulk-like rage fit at the end, and I’m betting we’ll see it happen on screen before the season ends. 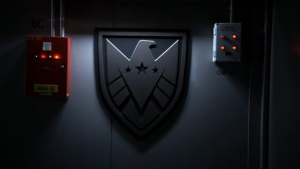 The last big plot thread is Mack and Bobbi’s plotting, which is finally confirmed to be on behalf of a competing faction of SHIELD, one that considers itself the true successor. It’s a pretty logical thing to have; not everyone would necessarily agree with Fury’s choice of successor, and I’d be willing to bet people who already disliked Fury felt he shouldn’t have been the one to decide who takes over in the first place. It’s just going to get a little confusing with two groups claiming to be SHIELD running around. This is basically what I predicted would be the case last week, except there’s no sign of Maria Hill or Stark being involved at this point. Someone had to form this group, however, and knowing that Edward James Olmos is the one playing its leader doesn’t mean he’s at the absolute top of the food chain there. I guess that brings up the question: Are Black Widow and Hawkeye still working for SHIELD in Avengers 2, and if so, which SHIELD? Because none of the Avengers know Coulson is alive, right? So they can’t be working for him. Hmm…

All in all, it was a good episode, even if the supervillain team didn’t really deliver on what it built up. I’m looking forward to getting a closer look at this other SHIELD next week in “Love in the Time of HYDRA.“