Comic book movies, like those in the Marvel Cinematic Universe, are far more popular than the comics from which they originate. Indeed, some of that even goes back to early TV series like the Bill Bixby Incredible Hulk or Adam West’s Batman, which served as the faces for those heroes to the public well outside the comic demographics. In spite of this, though, almost everyone going to see Iron Man or Wonder Woman in theaters knows that they’re characters from comic books.

Then there are other movies, where few people even know it was originally adapted from another medium at all. The success of the film so totally eclipsed the source material that it’s almost completely unknown in comparison. And that’s where we find these, four films that have left the sources to languish in the shadows of their popularity. 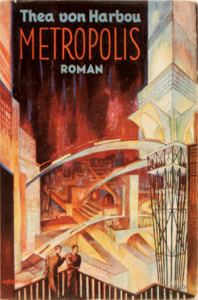 Okay so maybe you’ve never actually heard of Metropolis; but you should have. It was the first big-budget sci-fi movie EVER, with extremely impressive effects for its time, and it holds within it basic ideas that would resonate through cyberpunk in particular and science fiction cinema in general to this very day. But originally, it was based on a book written by Thea von Harbou, a German author and wife of Fritz Lang, who directed the film. That’s not a coincidence, of course, as the book was written specifically to be adapted, but many hail the story of the book as being far superior to that seen in the final film. Then again, it’s kinda comparing apples to oranges when one’s a silent film and the other’s a novel… and the novel’s themes (some of which relate to the occult) reveal von Harbou’s sympathies towards Naziism. So maybe it’s for the best that the book’s mostly forgotten now.

If you’re wondering what happened, Lang and von Harbou divorced, and Lang eventually fled to America, where he became one of the most influential directors of classic Hollywood, although that’s a little outside the scope of the site.

And on the complete opposite end of the cinematic landscape, we also have the Men in Black franchise, the original of which is actually a pretty entertaining movie. It’s funny, you know, and Will Smith’s in it, when he was transitioning from Fresh Prince comedy to Hollywood Action Hero. It had a pretty cool idea behind it, too, and I still think the kind of universe shown in that series could be really fascinating to explore in a… more competent manner.

But Men in Black didn’t create that aspect of it. The Neuralizer, the aliens, etc.–all that was from a Men in Black comic book. And that’s about all they share in common, really. The comic is quite dark, with the MIB as an “ends justify the means”-style organization willing to go to insane lengths to maintain the secret. They’re far more willing to kill humans, and their purview is much wider, encompassing the supernatural as well as the extraterrestrial. Really, it was more like The X-Files, except our investigators are the bad guys. It’s an extremely short comic, too, with only four issues that are unrelated to the films.

2. Planet of the Apes

I talk about Planet of the Apes from time to time, mostly to make fun of the ridiculous number of sequels and spinoffs it managed for a 60’s film, but there’s no denying the original’s place in film history. But before that movie in 1968, there was a book, written in French in 1963. It’s a satirical sci-fi novel by Pierre Boulle, about a planet (that’s not Earth) where human civilization grew lazy and were overthrown in their idle state by the Apes. The humans, much like in the film, are reduced to their base instincts, but even more extreme–there’s no intelligence at all left, and even being around them can cause the visiting Earth humans to endure the same fate. Ultimately, they’re able to escape the planet and return home, to Earth–except they’ve been traveling very close to the speed of light, so hundreds of years have passed. Enough time that Earth, too, has fallen to the Apes.

The ending of the book is obviously a very different kind of twist from that in the film, and it was the inspiration for that really weird scene at the end of the 2001 remake. I can’t say whether its obscurity is due to the book originally being in French, or if it’s just because the film hits most of the same points as the book while having them be more concise and logical.

I’m not real big on horror, though I sometimes make exceptions for sci-fi horror like Alien. The Thing is a similarly iconic sci-fi horror movie, one that John Carpenter is still most famous for (although I enjoyed his very weird first film, Dark Star, too). And some people know that it’s kinda based on a 1950’s film called The Thing from Another World. What they usually don’t know is that THAT film is based on a novella called “Who Goes There?” by John W. Campbell, an influential editor during the pulp magazine era of sci-fi (Odo’s character Douglas Pabst in “Far Beyond the Stars” was based on him).

“Who Goes There?” has most of the big ideas the film is known for–the antarctic setting, the team of scientists, the monster’s ability to perfectly mimic the person it’s taken over. The Thing itself is actually a little less dangerous in the story than the film, as it doesn’t take people over from the inside out, but more through straight-up devouring them. It’s also a bit more upbeat in the ending, in that literally anyone survives.

That’s all for this week. Any other movies that eclipsed their source material so much that I didn’t even think of them? Or maybe you’ve heard of one of these before? Leave a message in the comments, or hit me up on Twitter @RetroPhaseShift. We got our three Syfy shows again tonight, so you can always join me on Twitter for that, too!