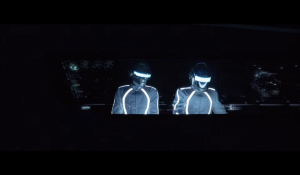 Cyberpunk these days is often heavy on the aesthetics–there’s a look to the whole genre that’s often considered crucial (and sometimes that’s one of the only things separating it from the present). What better way to showcase that style than by going to the local night club, one of the most obviously fashionable places around? While most of our heroes aren’t exactly the types to party in a cyberpunk club, their story will usually find a way to get them in the door, looking for a bad guy, or an informant, or hacker. Of course, these are way cooler than any place you or I have ever seen: lavishly decorated, crowded yet spacious, and playing some really loud (often really awesome) music.

Here are 4 of these hippest places to be, pulled straight from the dystopian cities in which they thrive. 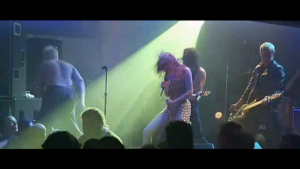 Strange Days is a 1995 cyberpunk film that’s a bit of a cult classic. It couldn’t really attain a larger following due to the extremely graphic violence that’s integral to the plot, but it still comes up every now and then. The story largely revolves around a device called a SQUID, which records first-person views directly from the wearer’s brain, allowing bizarre experiences to be traded and shared. A whole culture springs up around distributing these experiences, and one of the key spots in LA is this night club called Retinal Fetish. A lovely name, I know. The whole place is kind of odd for the genre, to be honest; while the crowd has that stereotypical “punk” look, the music doesn’t quite fit the atmosphere. It’s kind of hilarious when the guy does a stage dive. But if you’re looking for a place where high tech meets low life (and what could be more high tech than minidiscs?) then you need look no further. 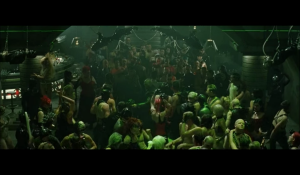 While The Matrix sequels get their fair share of (deserved) hate, they’re often just as visually striking as the original–and one of the most striking set pieces is the Club Hel, hangout for the Merovingian and one of the most cyberpunk club scenes ever caught on film. With its sickly green Matrix-lighting and almost heretical use of Christian architecture, the club’s very design conveys heavily that punk-ish nihilism and irreverence that is so often found in the apathetic masses of these worlds. The abundance of leather and vinyl goes for more of a BDSM look instead of the “spikes, spikes, and more spikes” that Strange Days went for, making this club way more deserving of that “fetish” moniker. Like the “Net Slums” of .Hack//, Club Hel is a gathering place for the old and unwanted programs that were supposed to be deleted, as the Merovingian, one of the oldest programs in the Matrix, takes on the role of its guardian. Don’t think he’s a good guy, though; the decadent and hedonistic air that Club Hel possesses is one he’s actively cultivated, and he’s ruthless towards anyone who will threaten that.

While this might be the most exclusive club on the list, it’s also the most dangerous as a result. Tread carefully. 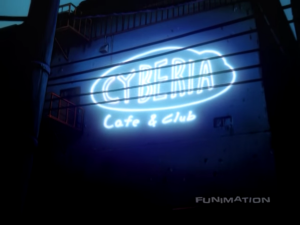 Be a little more proactive about checking ID than the bouncer is.

On the other end of the exclusivity spectrum there’s club Cyberia, nestled in a corner of Japan in the PRESENT DAY, PRESENT TIME! Cyberia welcomes everyone, even 14-year-olds, apparently, and no one has much of a problem with this. The world of Serial Experiments Lain is certainly a strange one, driven more by emotion and the lack thereof than anything else, but it’s all driven by the online network called The Wired. Cyberia is the place to be if you’re a hacker or technophile (whether you know it or not), and it’s one of the only sources of hot new tech-drugs like Accela, the nanomachine drug that expands your mind a little too far. Make sure you’re not around when that happens.

For those most interested in the latest technological developments, this is the cyberpunk club for you.

1. The End Of Line Club–Tron Legacy 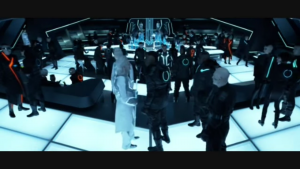 It’s been scientifically proven that glowing floors are 43% more fun to dance on.

When it comes to pure style, there’s only really one choice for the #1 spot. Perched high atop a skyscraper (does the Grid technically have a sky?) the End of Line club has a magnificent view outside its all glass exterior. Run by the mercurial Castor, a program with a flair for the theatrical, it was a place that gave people from any faction a place to relax and party carefree, although it seemed to be particularly frequented by members of the resistance. Its minimalist and monochromatic design gave it a memorable appearance, and the lights could easily be manipulated to suit any mood. But of course, the most noteworthy thing at the End of Line Club is the music–with Daft Punk themselves in the DJ Booth, how could it not be? The fact that Tron can lay claim to some of the earliest rumblings of cyberpunk certainly doesn’t hurt, either. Of course, the place’s popularity probably took a dive when CLU’s goons raided it and several of the patrons were Derezzed. You know, I’m starting to sense a pattern here in how these night club scenes end…

Maybe we’re better off staying in for the night.

That’s all for this week. Have another cyberpunk club you’d love to hang out in? You can let me know in the comments, or on Twitter @RetroPhaseShift. You can also like the Facebook page to keep up to date. Better yet, if you love cyberpunk, check out my take on it in The Arcology. And if you enjoyed the article, be sure to share it!