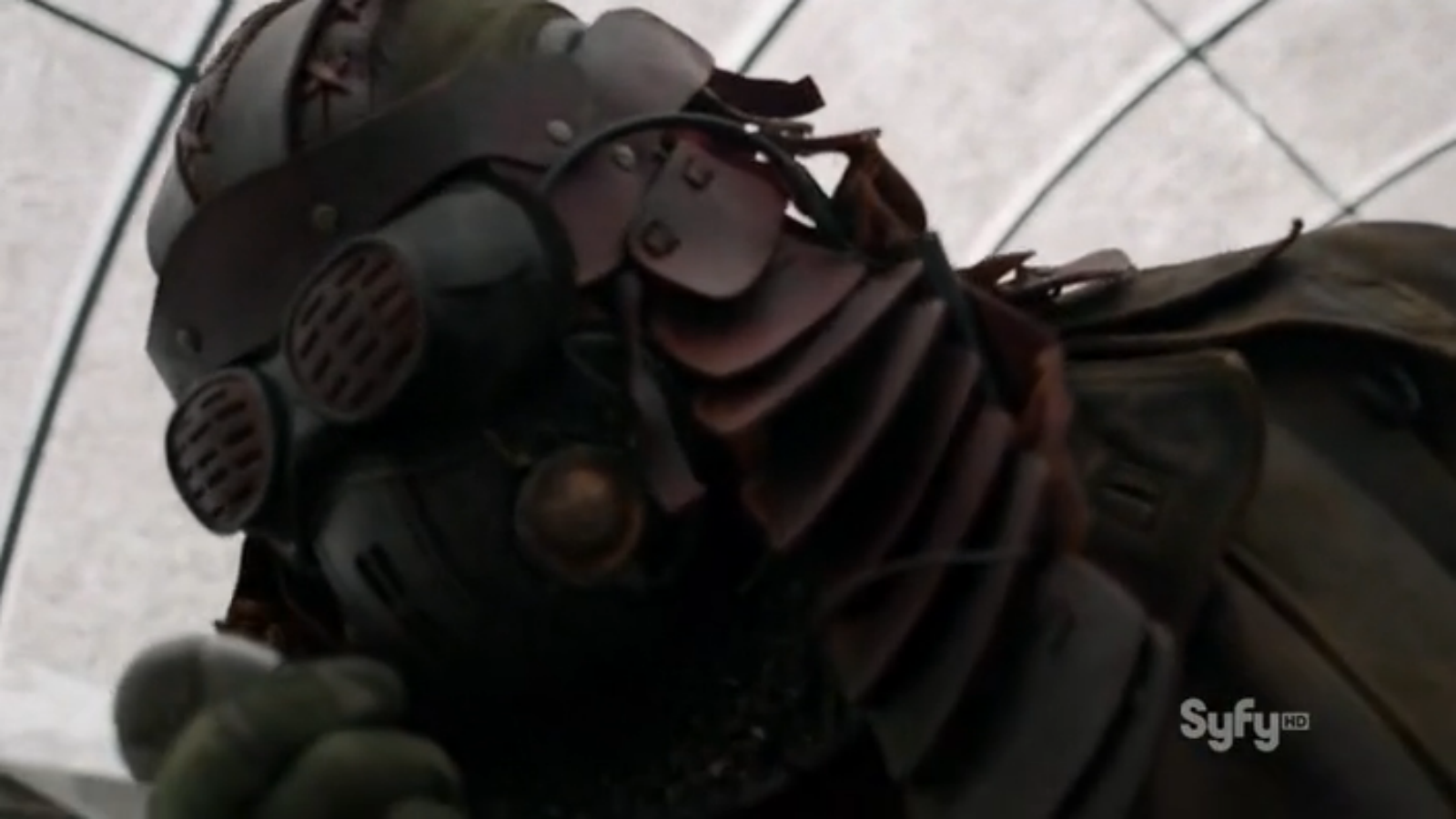 It seems like answers are finally on the way in regards to Irzu and the Kaziri, but some more returning faces steal the spotlight this week (and if you read the SDCC panel breakdown, you know exactly who) and with them just comes more questions. You’d think by this point it’d be time to answer some, right? Read on for the review.

The episode opens with Irisa catching Nolan up on her solo ventures for the last few weeks, including that lovely moment where she shot herself in the face (more like the neck), and it’s good to see them showing a little care for each other. But their first honest moments this season are disrupted by a call from Mercado, who wants Nolan to help stop a bomb that’s supposedly been set up by the Votanis Collective in New York. The figure they give for the population of New York (49,000) is shockingly small and is a nice way of reinforcing the idea of just how devastated the world is in the wake of the Pale Wars. They capture Datak’s Irathient contact from back in episode 5, who, if you recall, was a VC spy. One thing that’s never made clear in all this is why exactly it’s up to Nolan and the people in Defiance to deal with the problem. Was there no one to capture in New York? Why aren’t security officers there dealing with the problem, instead of leaving it to a hothead like Nolan who doesn’t have any particular love for the E-Rep? No idea, it’s never addressed beyond stating that this guy, Gorath, has all the pieces, which would seem to imply they spied on enough of his conversations to find his other contacts. The only thing I can think of is that they were suitably impressed with how he handled the incident way back in episode 2, but those skills are hardly useful halfway across the continent. Oh well.

“Hello, evil voice that somehow knows my name. How are you?”

So they bust into the Needwant, capture him, and cart him off. I could really do without the constant terrorist plots, honestly, but it’s here and it doesn’t take up too much of the episode so it’s okay for now. And yet, I get the feeling it’s about to be a big part of the show. The second they take him away, Amanda’s phone rings and a corrupted voice on the other end tells her to free Gorath or her sister dies, and then has Kenya speak up as proof. Of course, if they were able to call and threaten her that soon after he was taken away (she hadn’t even had time to go back inside yet) then it makes you wonder why the hell they didn’t just extract him before the E-Rep had the chance to raid the place. Hopefully his capture is all part of the plan, or else this is one big plot hole.

The E-Rep, quite logically, go around to all the usual suspects, starting with Stahma. She explains, by using her reputation as the new big time player, that she’s profited quite well under their rule and has no reason to go against them, much less by giving away money to do it. Then we see that Tommy’s in full E-Rep uniform now, even though he and Berlin are still on the outs. Stahma uses this to her advantage by implying she knows about Berlin’s fling with Nolan, which she doesn’t deny when Tommy asks her about it after they leave. Ouch. Of course, having sex with someone your ex hates to get back at them generally works better when said ex knows about it, so Stahma may have done her a favor on that one. 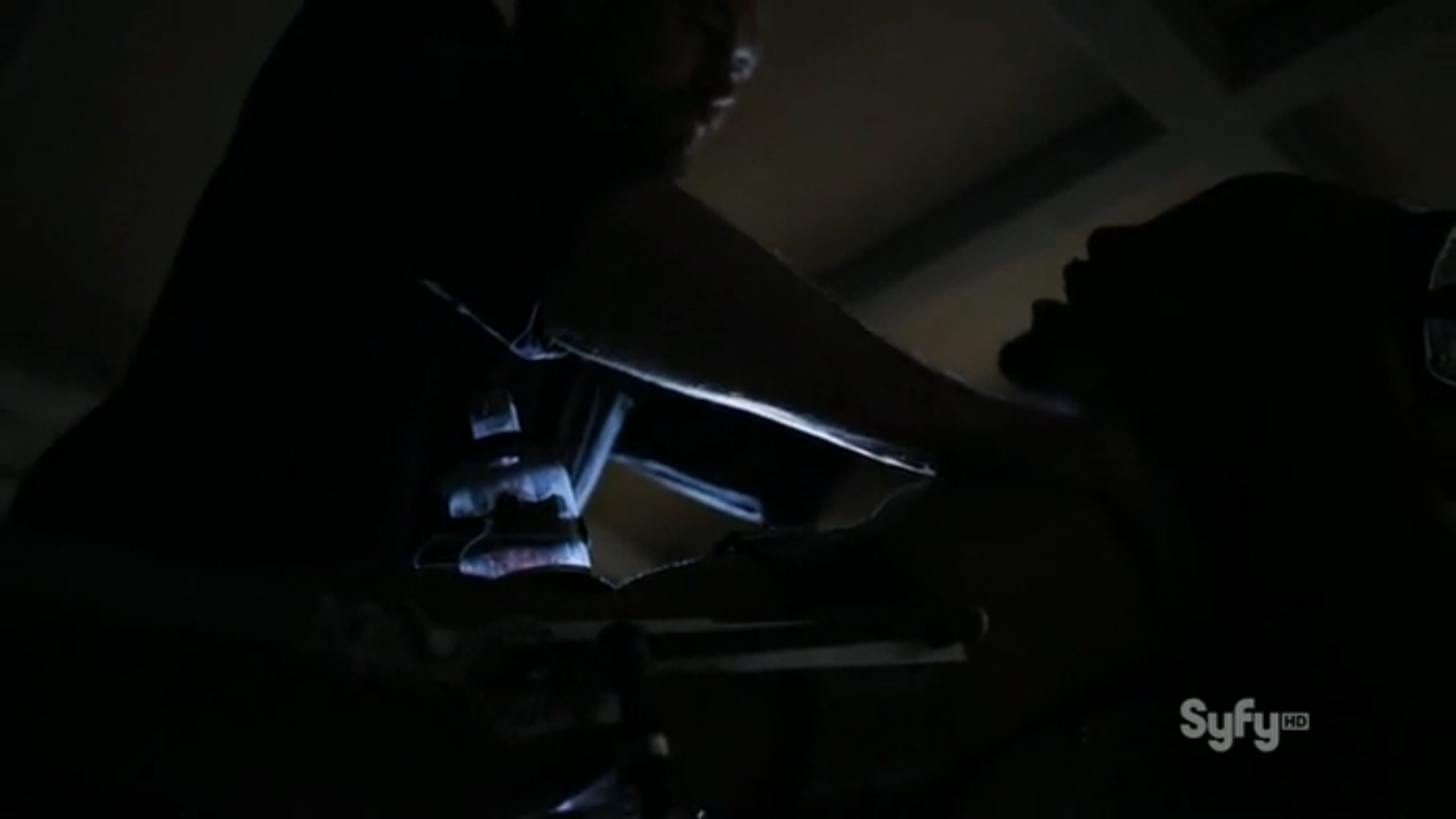 Unlike Jack Bauer, Nolan prefers to perform his interrogations in poor lighting for minimal accuracy.

It’s also easy to see why they sent Pottinger away, because the things that Mercado has them doing this episode would have washed away any good will he’d managed to build up over the season. Nolan tries to talk some sense into Gorath, who tries to pull the old “in another world, we might have been friends” card straight out of Star Trek, but there’s no chance that’s working on Nolan. He uses the shrill bugs from episode 2 (you know, those things he was horrified about seeing used on civilians?) as a torture device. It’s all for nothing, though, and ultimately Mercado decides to implant Gorath with an EGO unit and use that to extract the memories and data from his mind, which necessitates recalling Pottinger back to town. Lotta continuity this week!

Stahma visits Datak, who’s offended he wasn’t on the usual suspects list, to remind him that his contact getting captured is bad news for both of them. And also Rafe, since that’s who Datak was getting weapons for, after all. She has sex with him to get him to do what she feels is necessary–and leaves her shopping basket with a disassembled rifle (not a sawed off shotgun, as many a twitter user corrected me) in it to clue him on just what that is.

Amanda decides to come clean with Nolan, who immediately suspects her of doing drugs and hallucinating again. But no, there really is a masked mystery man this time, so Nolan takes her “hailer” (because everyone forgot normal words like “walkie-talkie” after the Arkfall, I guess) and comes up with a plan to triangulate the caller’s origin. He’s about to head out a good distance so as to provide a third point for their triangle, but Irisa points out that, well, that’s dangerous and she’s immortal, so maybe she should do that. And now that she’s started being honest, he has to give her a show of good faith. Bad choice, Nolan.

As Stahma leave’s Datak’s little hovel, Raiga actually speaks up for once and says she shouldn’t involve Datak in this crap. He thinks she’s going to forgive him, and while Datak might let her and Alak live, pretty much the whole rest of the gang would be killed for betraying him, including Raiga. She responds by essentially saying, in her own devious way, that his continued existence should be reward enough for his loyalty. Damn, she’s getting downright brutal lately. 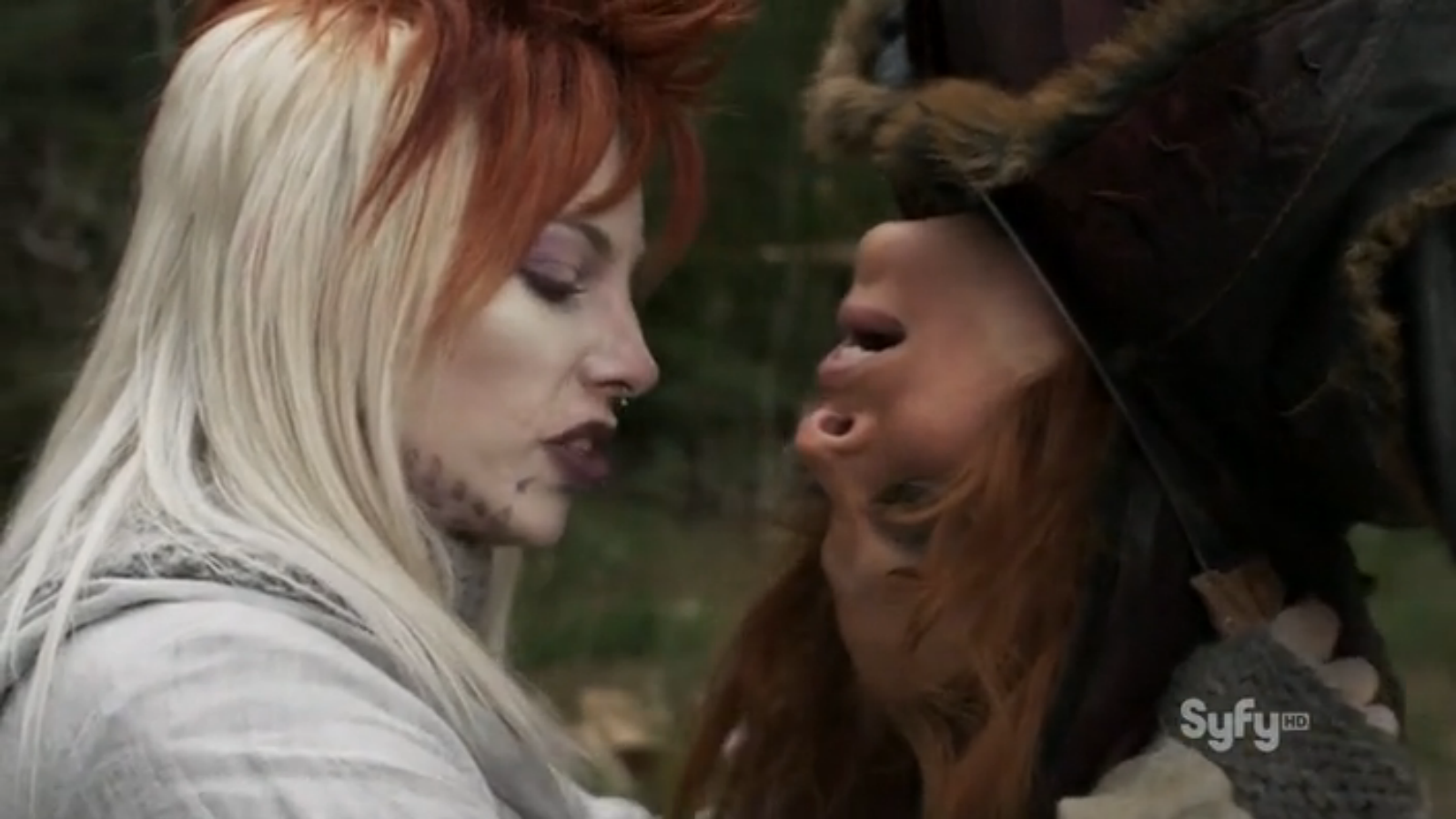 Gotta say, I really do like this girl’s style. It’s very interesting and distinct for a Castithan.

Irisa has some flashbacks while driving out to the place where she was to set up the triangulation, which nearly causes her to crash into a tree. She decides that’s enough driving for one day and walks out into the woods, where she finds a campsite and immediately proceeds to set off a trap. The camp’s owner notices and–surprise!–it’s the Casti fishmonger who she killed back in episode 1. More continuity! She’s about to kill Irisa until the latter makes it clear that she understands what’s happening and can explain some. Casti girl (apparently named “Fionu”; don’t ask me how that’s pronounced) cuts her down and they chat, revealing that she also has flashbacks to the Kaziri and has been attacking people. Guess this means we can cross off the “2 by 2” part of that theory, although I’m not ready to count it out entirely yet.

Kenya’s captor leaves her some food, which  she then throws on the ground and tries to use the aluminum tray to break her chains with. This would seem to indicate that she’s not cooperating in any way, as one might expect from the way her earlier scenes were set up. Meanwhile, masked man is outside, working on a car, still wearing his horribly vision obstructing mask. Kenya eventually manages to kick the bolts out, attacks the guy and knocks him out, then tries to start the car she just saw him working on. Naturally, it doesn’t work, but she manages to steal his hailer and call Amanda before she ends up recaptured. And since Irisa’s new friend broke her hailer, the triangulation failed and things have only gotten worse. Amanda deals with this step backwards by knocking Nolan out when he tries to keep her from doing something stupid and going to break Gorath out on her own. Way to prove him right!

Spaceship from Close Encounters not included.

Fionu describes her visions, stating that for her, it’s Rayetso, the Casti god, which seems to lend credence to the AI theory. Sukar shows up, and soon a whole horde of Irzumbies come up over the hill. Someone’s been busy. Nolan wakes up a few hours later, cuffed to the prison bars. Amanda’s busy raiding Doc’s stash, stealing some tranquilizers. Doc assumes she’s trying to get high again and takes them away. Then, Amanda gets one of her workers (specifically “Treasure Doll,” the one who’d been snatching Alak away) to steal her an E-Rep uniform so she can break in. Doc didn’t take everything from her, however, and her plan surprisingly works, just long enough to break Gorath out and give Datak a chance to assassinate him. Good job ensuring the bomb goes off!

Nolan stopped her from taking him away, and manages to get some intel out of him just before he dies. Amanda blames Nolan for Kenya’s inevitable death, but he points out that the mask guy has no way to know that Gorath is dead, so he disguises himself as Gorath by wearing a hoodie and then just blasting the masked man when he demands the hood come off. But Masked man was smart enough to wear body armor, so he and another guy flee the scene. Kenya and Amanda are reunited. Hooray. 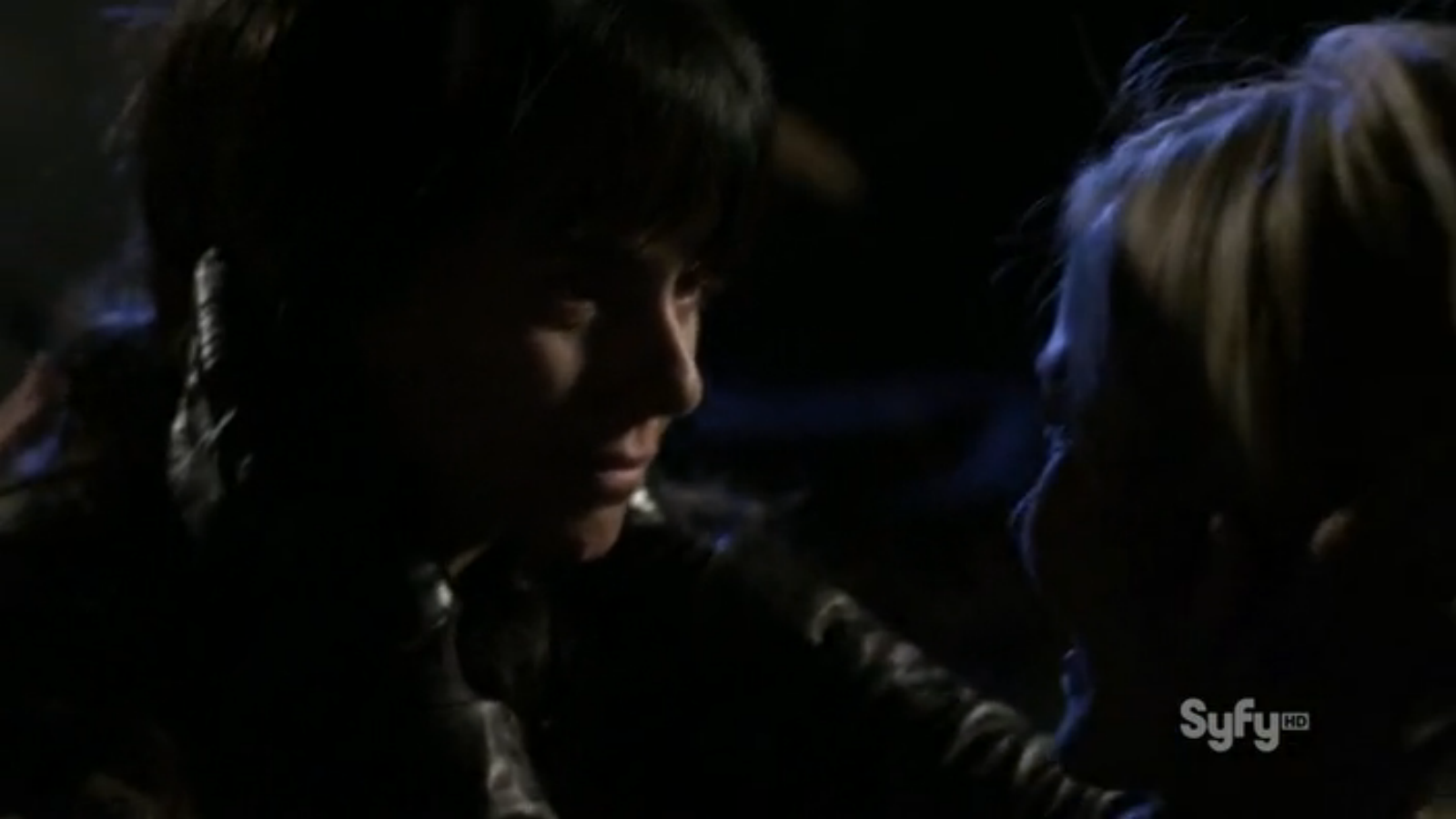 Kenya’s back! Or at least, something that looks like her.

So there wasn’t a lot answered this episode, but it’s clear things are getting set up for some answers. How is Kenya alive? No clue, but it looks like that might be the focus of next week. My theory on the masked man is that he’s one of the miners, just like the earlier masked men from episode 5. They were holding Kenya in a greenhouse that appeared to be full of munitions, and it wasn’t too far outside of town. This would also explain why Gorath didn’t know anything about Kenya, and why the VC didn’t act if they knew Gorath was about to be nabbed. Quite simply, Rafe’s miners heard that Gorath was going to be taken in, and needed to make sure that the E-Rep didn’t find out that Rafe had been buying weapons from the VC through him. The big flaw in this theory is that I wouldn’t think Rafe’s miners would want to see New York bombed, no matter how much they hate the E-Rep, although I could be wrong. Even so, it doesn’t really answer the question of where Kenya came from, however; my separate theory on her reappearance is that she may be one of the Indogene doubles disguised as a human, much like the Astronaut and Mayor from last season. They typically don’t know that they’re not the original until activated, so that would explain why she was still trying to escape, and I think if this is the case, then the miners likely aren’t aware, either. They were probably just provided her as a bargaining chip, as another step in the VC plot. That starts to get really complex, however, and I don’t know how likely it is. I suppose we’ll find out next week!