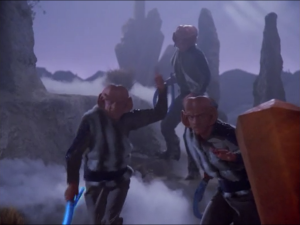 With Agents of S.H.I.E.L.D.‘s second season almost half over, I think it’s safe to say that the show has now reached quality-TV levels, becoming a show that’s thoroughly entertaining on its own, and not just as an adjunct to the Marvel Cinematic Universe. Defiance, too, proved its worth in its second season and earning the right to a third. But I think most fans would be willing to admit that these two shows had some pretty significant problems when they started, with SHIELD having insignificant, family-friendly standalone episodes and lifeless, peppy characters, and Defiance trying too hard to emulate premium HBO shows like Game of Thrones while centering on a group of people who were almost the polar opposite of SHIELD‘s: selfish, petty and often times cruel. It’s basically the opposite problem of those shows that ruin it all in the ending, but this trip-up is a far more common one. And that’s why it’s so difficult to watch these one-season shows (like Charlie Jade) fail to move on. Usually, it takes time for a TV show to find itself, but often times they don’t get the chance. Just look at these, 4 shows with downright terrible first seasons, and imagine the awesomeness we’d have missed out on if they hadn’t been given a chance. 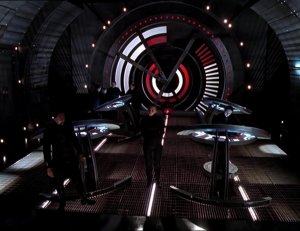 Crais’s single minded vengeance quest left the character without much room for development until he moved past it.

Well, it’s not exactly that Farscape‘s first season is awful; it’s just that it lacks a lot of the things that made the show what it is. The crew of Moya don’t get along, and they’re backstabbing each other at every opportunity. There’s no trust at all, between anyone. The story arc with the wormholes hadn’t really gotten started yet, and to be completely honest, Crais never really felt like a well and true villain, and his motivations were weak and cliche. It’s little wonder that he eventually slid over to the good team, which is also (and not coincidentally) when Farscape began to solidify. Because Crais’ move left room for Scorpius to appear, a real and dangerous adversary for Crichton and the crew who had actual, complex motivations for his actions. Once Scorpius is on the scene, the show’s trademark insanity took hold, the crew began to function as a unit, and everyone was better for it. 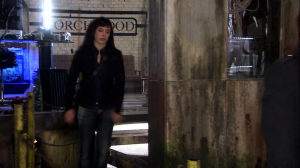 Torchwood’s first series is probably the strangest mix of camp and dead straight drama ever.

As a spinoff of Doctor Who, no one was really sure what to expect out of Torchwood. The first series did make exactly one thing clear: this show was for adults. Kids, don’t even watch it from behind the couch. There’s lots of sex and sexuality discussed, often times irrelevant to whatever is going on, and many of the characters come across as just plain unlikable, like Owen, whose introduction is using some kind of alien pheromones to seduce women (which is effectively date rape, but for some reason it never counts when there’s a sci-fi or magical explanation instead of just chloroform). Worse still is that we see the team’s presence is corrupting their newest member, Gwen, until she’s cheating on her husband Rhys, who just so happened to be one of the most likable guys in the bunch. We did have Jack, of course, but he can only do so much. A lot of the episodes are more enjoyable on a second viewing, especially with the context that the rest of the series provides, but the marked improvement at the end of the first season with “Captain Jack Harkness” and the start of the second with things like Rhys finding out about Torchwood and Martha appearing. It hit maximum quality with Children of Earth, but crashed again after that  with Miracle Day. Ah well, they can’t all stay amazing forever. 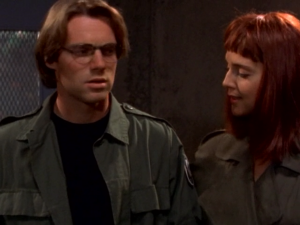 With only the 1994 movie by Roland Emmerich to go on, Stargate didn’t have much to work with. They had the gate, which was basically a portal to any adventure they wanted to write, and an Egyptian theme, but that was pretty much it. Even the gate’s ability to dial more than one world was new to the show. They also had a lot of crappy backstory to deal with, like the death of O’Neill’s son, which really didn’t fit well with what they were trying to do. It wasn’t until SG-1 was able to step away from the movie’s shadow that it took off, developing the characteristic self-aware humor (due in no small part to Richard Dean Anderson) and a complex, long-running story arc about the Goa’uld and their dominion over the galaxy in the time since Earth’s gate was buried. The first season itself is just loaded with cringeworthy moments, like Carter’s infamous “Reproductive Organs” speech in the first episode, the nearly as sexist “Hathor” episode, and that really bad “totally-wrote-this-for-you-guys-and-didn’t-self-plagiarize” episode I mentioned two weeks ago, “Emancipation.” That’s a rocky start for a show that went on to run 10 seasons and 2 TV movies. If it had been canceled then, we’d never have seen Atlantis or Universe, either.

1. Star Trek: The Next Generation 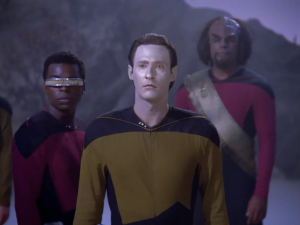 Early TNG‘s problems are extremely well documented, and it’s clear from watching it that part of it is simply a lack of understanding on the part of those making it, including Gene Roddenberry. They were trying to make a 60’s style show in the 80’s, and it just wasn’t working. Some of the episodes, like “The Naked Now” are literally just rehashes of old TOS episodes. Others, like “The Last Outpost,” suffer from poor execution, where the supposedly dangerous and deadly Ferengi appeared on screen for the first time and instantly became the joke of the franchise. Numerous more general issues popped up as well. The spandex uniforms looked like silly jumpsuits, and not as professional as the wool ones that were introduced later in the show’s run. The characters weren’t themselves yet, with Picard as more of a cranky old man than the warm, dignified and highly moral captain that we all know and love. The heavy presence of Wesley did the show no favors, either. Even the effects seemed dated and pathetic,  with a handful of exceptions (the Q net, for example).

TNG then followed that lackluster first season up with the second, which is not much of an improvement. At least season 2 had the writer’s strike to excuse its awfulness, and it still managed to produce a few classics like “Measure of a Man.” It’s amazing the show went on to become as successful as it did, having a lasting impact on American pop culture independent of its ties to TOS and spawning the three subsequent series to boot. I don’t even want to imagine a world where TNG was canceled after only one or two seasons. Those poor alternate universe bastards…